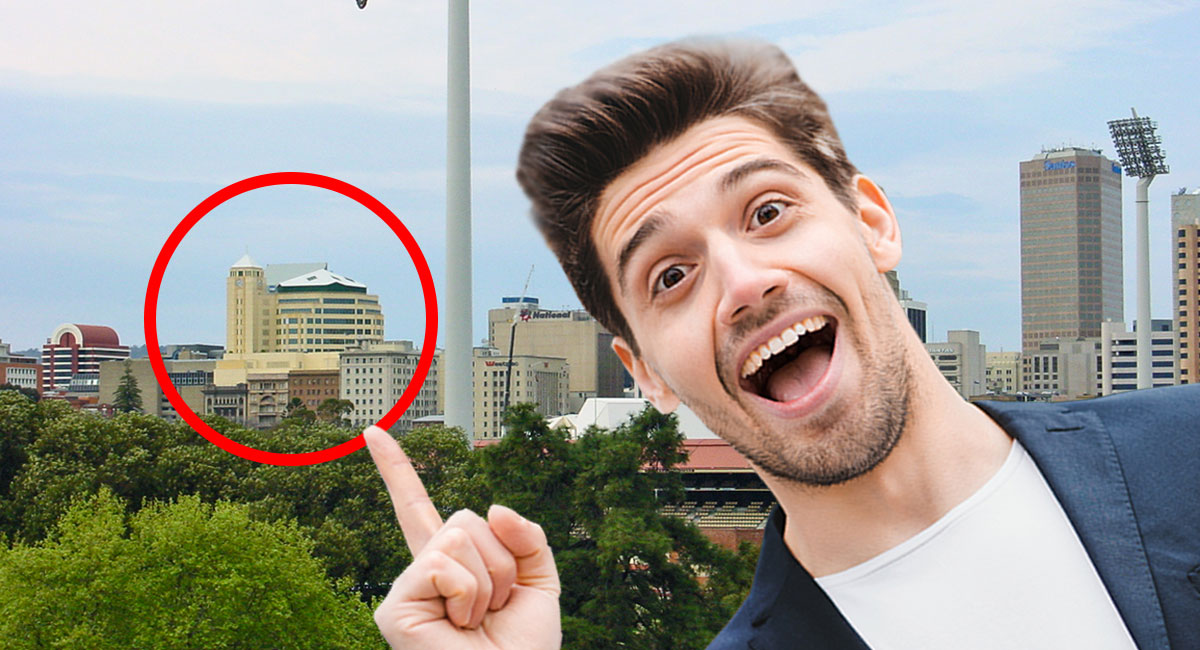 All of this madness at the moment has made us realise what’s really important to us: mostly-empty, multi-level CBD shopping centres.

Wow – how the time flies, eh! While you were probably still just a young adult, teenager, little kid, toddler, or not born yet, the Myer Centre was finally completed in 1991 after three years of construction!

The grand opening was actually delayed multiple times due to some difficulties behind the scenes – but it was more than worth the wait! Standing 75 metres tall and housing Australia’s only indoor rollercoaster – the 1991th year of our lord and saviour saw the Myer Centre officially open its doors for business!

Can you freaking believe that!? I know I couldn’t!

As if being named after the retail giant wasn’t cool enough, guess which shopping centre also has the biggest Myer store in South Australia. Nope, not Colonnades. Marion? Pull the other one! And sure as shit not Tea Tree Plaza.

We all know the old saying, ‘Everything’s bigger in the Adelaide CBD!’ and boy, does the Myer Centre live up to that!

So next time you need to go shopping at the largest Myer store in all of South Australia – just head straight to the Myer Centre in Rundle Mall! Because as I just said, that’s where it is.

Despite eventually coming up with a much terser name (or shorter, depending on your level of education), Dazzeland was original going to commemorate Adelaide’s moustachioed king of the silver screen, George Donikian (OBE).

Interestingly, George Donikian (OBE) was very much alive and well at the time – and still is today, probably. And it was exactly this kind of forward-thinking that really helped to put the Myer Centre on the map.

We never did hear from George Donikian (OBE) again, and we wish him all the very best.

4. Nick Xenophon once rode the rollercoaster for 117 straight hours to protest the GST

In what was described by many at the time as ‘A publicity stunt’ and by Nick Xenophon as ‘No it isn’t’, Nicky boy strapped in tight and rode that frictionless bitch for the better part of 5 days.

With staffers chucking him packets of dried sultanas and bottles of Lucozade for sustenance, Xenophon made a defiant stand against the State Government’s plans to introduce the GST in the year 2000.

Despite repeated confirmations that the GST was actually a Federal Government decision, not a state one, Nick Xenophon was having none of it. He wasn’t going to be fooled by those greasy, private-school educated, money-laundering State Government fat-cats was he now?

‘This rollercoaster is indicative of what small business owners are going to have to put up with if the GST comes in. It’s above ground, fast, and runs on two rails,’ he was overheard saying to himself in his bedroom mirror.

Nick did, unfortunately, fail to inform any media outlets about when he was going to do it, and so it didn’t actually receive any press coverage.

Still, do you think his protest was enough to stop the GST? Leave your answers in the comments below.

5. It STILL doesn’t have any running water

Due to a planning clusterfuck by some very silly sausages, the Myer Centre is still without running water or even any plumbing to this day. To avoid any problems, 3 times a week, staff from the food court are tasked with bucketing fresh water directly from the Torrens River.

And while this may sound (and smell) like a sub-optimal solution, it’s generated some fascinating results!

Carrying the buckets back-and-forth from the Torrens provides food court workers with some much-needed exercise and sun exposure, while the unique tang of the water really makes for some memorable cuisine!

Just like the old saying goes, ‘The water always tastes better in the Adelaide CBD’ and you’d be an absolute knob not to believe that.

6. My mate Nathan saw the Triple Thunders there once and he got a free can of coke!

And he still won’t shut up about it, either. Jesus Christ, Nathan.

7. It was once home to almost 17 Granny May’s stores

At the peak of the novelty mug and cheeky homewares boom, Granny May’s had more than 11 locations all in the one building. Fuck!

In fact, in the late ‘90s, it was almost impossible to set foot in the Myer Centre without buying an apron with a big ol’ set of titties on the front, or a novelty office item that you desperately needed to distract from your horrible personality.

But something this good was never going to last, and slowly but surely each Granny May’s closed down until the remaining store was rebranded as a ‘Wacky Shack’ which may or may not still be there as I can’t be bothered checking.

It’s all swing and roundabouts, eh?

8. Hollywood A-lister Matthew Modine has never once been inside

Despite a hectic schedule appearing in such films as ‘The Browning Verson’, ‘Very Mean Men’, and ‘Stars In Shorts: No Ordinary Love’, you’d think Mr. Modine would have been able to find the time to pop in at least once – but sadly, that day still hasn’t come.

Will 2020 be the year that Matthew Modine finally breaks the drought? Only time will tell.

It’s a real handful – that’s for sure!

But interestingly, did you know that the Myer Centre is also really heavy?

In fact, if you were to weigh the building yourself, you’d quickly discover that it’s even heavier than 4,400 KGs. And we’re not even talking about kilograms; we’re talking Adelaide’s very own blustering opinion-machine Ken ‘KG’ Cunningham.

It all just comes down to simple maths. Let’s just assume ol’ Ken weighs around 70 kg (and that’s probably being a bit generous!), even if you could clone another 4,399 versions of him, not only would you heavily upset Graham Cornes but that would still only weigh over 3,000 kilograms – and the Myer Centre is even heavier than that!

10. There’s still a secret Dazzeland hidden in the basement!

Not many people know about this one – and let’s do our best to keep it that way, alright?

Anyway, yes, there is indeed a secret Dazzeland located in the basement – complete with a rollercoaster, Tunzafun arcade, Darrell Lea, George Donikian (OBE) gift shop, and much, much more!

And best of all, entering the secret Dazzeland is a snap!

Simply walk into the Chemist Warehouse located on the basement level, and look for an old woman with a nametag that says ‘Pathenia’. Then look her directly in the eyes, hold one arm behind your back with your thumb and ring finger pressed together, and say, ‘My my my Pathenia, my auntie tells me the dandelions are lovely in the first two weeks of September.’

She’ll chuck you the keys.