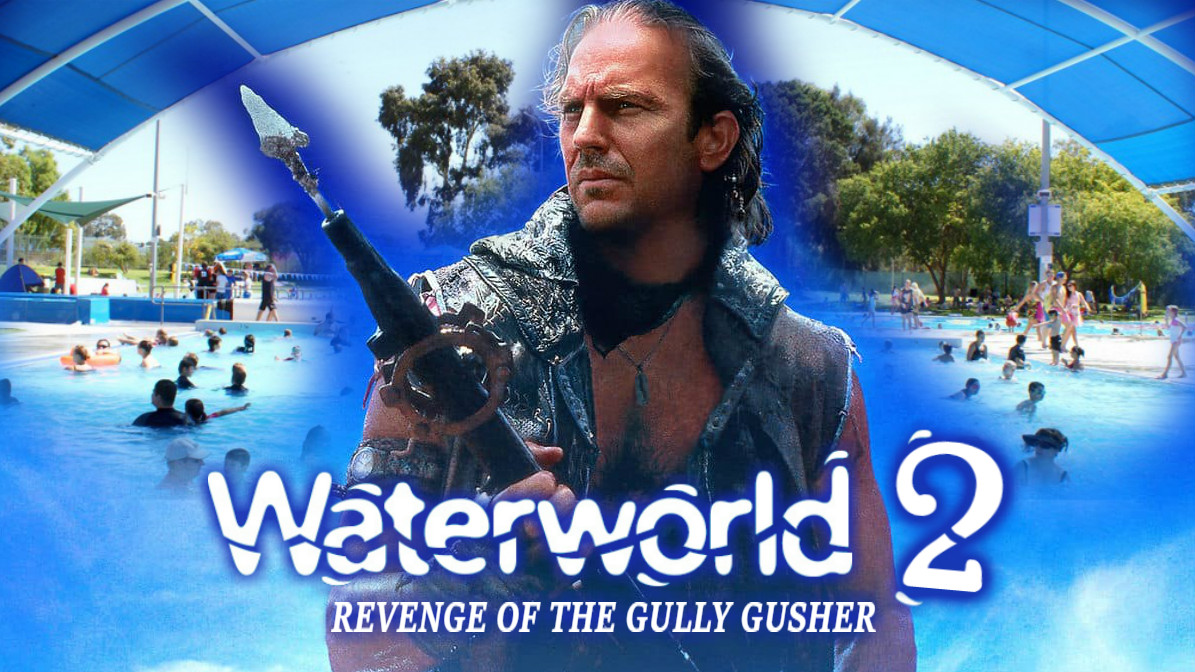 With Adelaide seemingly becoming a relatively budget-friendly locale for upcoming Hollywood flops, it has become apparent that Mortal Kombat isn’t the only film being produced here at the moment.

Tin Cup star, and one of those ‘actors you can’t remember exactly what they really look like, but when you see them you know who it is’, Kevin Costner has been spotted filming the sequel to what was once the most expensive film ever made, right here in our very own Waterworld.

Adelaide Mail spoke exclusively with Costner about the upcoming motion picture and why Ridgehaven was chosen as the central set. Costner stated ‘The choice was obvious really. Production costs blew out massively in the first Waterworld movie in 1995 because of all the time actually filming at sea and my Beanie Baby addiction. However this time, there’s already an entire Waterworld built, which will really reduce production costs’.

Costner continued ‘Plus it’s got everything we need for a post-apocalyptic setting. With some clever camera angles and a little bit of CGI, Ridgehaven can quite easily appear to be part of a doomsday stricken hell-hole.’

However, Costner admits there may be some slight issues when it comes to the production of the movie, but these can also be used to an advantage. ‘Well for one, there’s the “mums and bubs splash time” session Tuesday mornings which could get in the way. But I have a plan to make it look like I’m saving those babies from brainwashed Sirens trying to sacrifice them to the Sea Gods by drowning or something, I don’t know yet, we’ll figure out the plot along the way, that’s the way it happened with the first one. Plus we won’t tell the mums either, that way their genuine concern of a man taking snatching their baby will really shine through on camera’.

‘Second, there’s a lot of ducks at Waterworld, what the hell is with that? Little green slimy poos everywhere. But I’ll just make these ducks, and their poo, an integral part of the sequel script as my only form of sustenance in this barren wasteland. Third, kids at the skate park keep making fun of my costumes. And also, the slides are too expensive to go on and not as good as the old ones. But did you hear that people once put razorblades on them? And the Aquatic Centre slides, and Greenhills, and The Beachouse, and probably anywhere in Adelaide where there’s a waterslide? Crazy, huh?’

Budding South Australian underpaid extras will also get a chance to star in “Waterworld 2: Revenge of the Gully Gusher”, apparently whether they like it or not according to Costner. ‘All Waterworld attendees may appear in the film as I’ll be undertaking a lot of covert filming, mostly with my iPhone. So who knows? Maybe you’ll be in a starring role as ‘The Cornetto Pirate’, ‘The Speedo Bandit’ or ‘The Changeroom Mistress’’.

When asked about when the rest of the production team would be arriving in Ridgehaven, Costner replied ‘Oh no, it’s just me’.