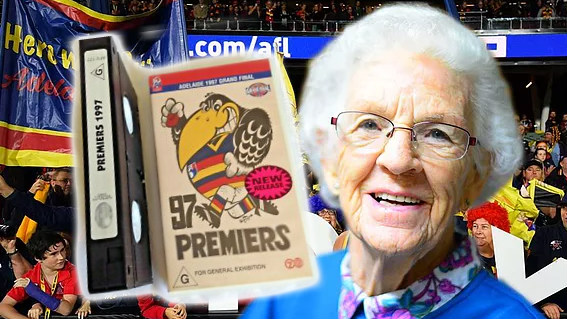 After a shocking Showdown loss over the weekend, one-eyed (her good one) Adelaide Crows fan Rose Parque has decided to do the only thing that makes her feel better, re-watch the recent back to back Grand final victories.

‘I do this every time I’m feeling down about my boys’, said Rose ‘it’s basically my therapy. I bake some nice scones, pull out my hand knitted blanket, and settle in to watch a game where I can name more than three of the players’.

Rose attended the Showdown on the weekend, arriving three hours early, but left at quarter time ‘to beat Beulah Park traffic’, but not before shouting at a jogging umpire for not ‘looking after her Rory’. In the end Rose states that she was glad she left the game early, as per usual, because of the performance by ‘her boys’ in the last half, plus her throat was getting sore from indiscriminately shouting ‘BALL!’ whenever an Adelaide player touched an opponent.

‘Watching the Grand Final will cheer me up though’, Rose concluded ‘I just need to call the grandkids first so they can spend 45 minutes talking me through how to use the remote control again’.