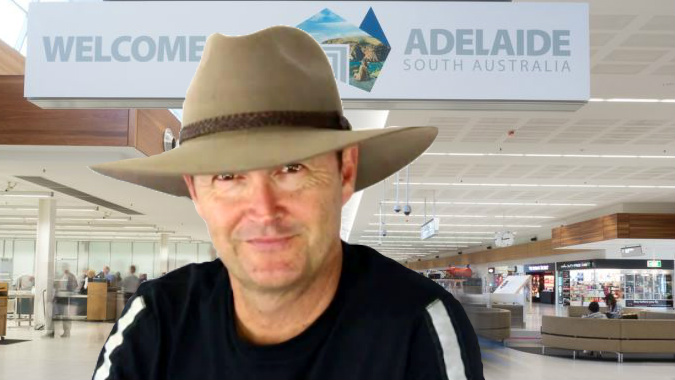 Nothing gives Bruce Jolliswagmen greater joy than getting to showcase how he comes from a regional area in the form of overpriced headwear.

Jumping at the opportunity to pick up one of his children from Adelaide Airport, Bruce donned his Akubra and arrived at the terminal approximately seven hours early claiming it was “to beat all that bloody city traffic, you know how it is down there”. However, in reality it was much more likely he just wanted the opportunity to wander aimlessly around the airport to prove how rural he truly is.

Pulling up a stool to the Cooper’s bar and ordering a double Bundy on ice was Bruce’s first stop at about six thirty in the morning. From there his attempts to “spin a cuppla’ country yarns” to executives at a business breakfast were quickly shut down. ‘Typical’, Bruce told Adelaide Mail ‘these bloody city slickers can’t handle the bush banter. They see this Akubra and they’re all hopping away like a loose ‘roo’.

Next Bruce visited several airport shops, taking particular interest in the Australian Souvenir store. He spent some time trying on other Akubras, whilst refusing to take off his own Akubra, then scoffing and shaking his head at a selection of UGG boots. ‘See these bloody things?’ Bruce exclaimed to nobody particular ‘made overseas, probably. You want to know something about real Aussie wool? Let me spin you a yarn about my days as a sheep shearer on Narnu Farm for my year 6 camp’.

After finding no luck in striking up random one-way conversations with travelers trying to board their planes, or airport staff just wanting to do their jobs, Bruce then moved to the Rex departure gates where he found his element.

‘Regional travelers, see, this is where the real folk are, none of these bloody city slickers too busy for a quick Bundy and yarn’ Bruce loudly slurred.

Sneaking his way into the Rex Lounge, a regional travelers hierarchy had formed with according to Akubra size. All members were drinking Bundy on ice, with chants of “where ya’ headed?” echoing throughout the lounge.

An overjoyed Bruce was finally asked by a man with a similar sized Akubra where he was headed, to which he replied ‘Nah, just here to pick up me kids mate. Came in here ‘cos I can’t stand all those bloody city slickers. Plus, not even Rex flies to where I live mate. That’ll give you a bit of an idea about how far out I am’.

Bruce eventually made his way back to the Virgin terminal to pick up his child and then drove back to their home in Mount Barker.