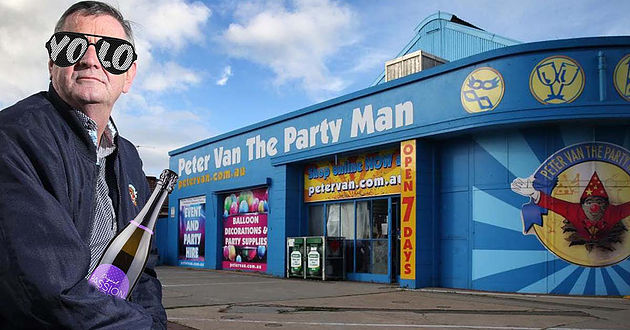 It’s been over thirty years of non-stop debauchery for Goodwood Road’s most-famous party man Peter Van, but his days of all-nighters may soon be over as the decades of parties begin to catch up with him.

The announcement came from Van himself on Monday, as the tired looking party animal fronted a press conference to tackle his impending night off and future plans.

‘The time has come to step aside from the partying business’, announced Van as he removed his sunglasses to reveal eyes that were propped open with two matchsticks Bugs Bunny-style.

‘It’s a younger man’s game. I only fell into partying as a business because my name kinda rhymed. I didn’t really think about exactly what it would entail. To be honest, I’m not really sure how it’s a sustainable business model’.

‘Customers would walk into my store and I’d think “excellent, they want to buy some balloons or maybe one of my sexy Chewbacca costumes”, but no. They all just want to pay me to party with them. I don’t know why. It’s not like there’s anything in my business name that makes people think that’s what I do for a job. I really just want to go to sleep’.

After receiving a compulsory acquisition order for his business’s land, Van is taking the opportunity re-brand. From Monday the shopfront will read “Peter Van the Suburban Dad Who Talks Fondly About His Party Days However Now Really Values His Family Time and My Wife Played No Part In This Decision”.