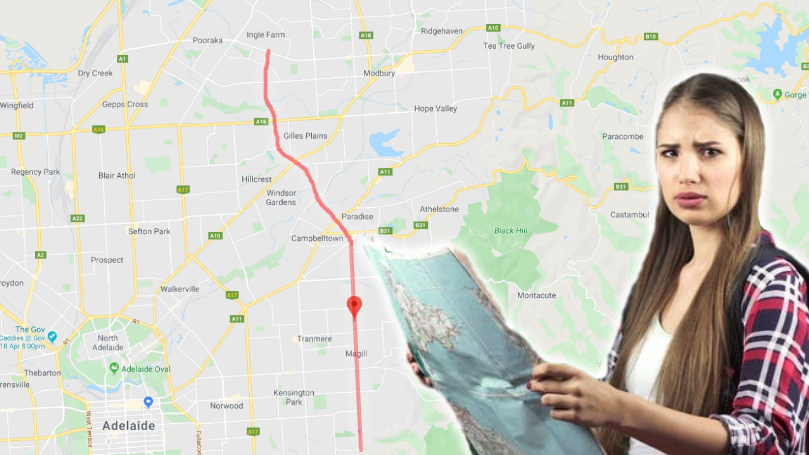 Adelaide’s single stretch of road with more names than any other, Walkleys / Sudholz / Darley / Newton / St Bernards / Penfold Road is to get even more names.

When the road(s) was first named, Adelaide wasn’t the bustling metropolis that is today, and it was believed that it would help give the impression of the city having many major roads. Now after heavy lobbying from the street sign manufacturing and satellite navigation industries, local councils are set to more than double the number of names given to this stretch of road.

Sat Nav Organisation of Telcos (SNOT) media manger, Wotstha Internette said, ‘Do you know, there are people in Adelaide who haven’t renewed their subscription to our services for over 20 years and never been lost? We really had to do something about it’.

Starting at the wealthy side of town, the top end of Penfold Rd will become Penfolds Grange, while the bottom end will be renamed Penfolds Club Tawny Rd.

St Bernards Rd will be renamed Cocker Spaniels Rd to reflect the constant land subdivision in the area, where it would never be suitable for a St Bernard to live. However, selected locations will keep the St Bernards Rd name.

Campbelltown councillor, Hector Veale said ‘Any local business that has St Bernards in its name, will  retain their current address to avoid confusion’, and also added that ‘Newton Rd will be split into two, New Newton Rd and O.G. Newton Rd. We’re hoping to attract some travelers from the other side of town who might confuse O.G. Newton Rd with the O.G. O.G. Rd’.

Darley Rd will retain its name for its entirety except for the last 100 metres which will be named Warning You Are Heading North Of The River Rd, to aid all those people in the Campbelltown council who think they live in the eastern suburbs.

Likewise Sudholz Rd will retain its name for the majority of its length, except outside the  Holden Hill Police Station, which will be renamed Sergeant Sudholz Rd. When approached for comment, the Sergeant on duty said, ‘I know nothing’, a reference we millennials didn’t quite get.

The start of Walkleys Rd will be renamed Lock Your Daws Rd due to the proximity to the prison, while the Salisbury council has arranged sponsorship for the northern end at Ingle Farm to be renamed Coles Rd.

And just like the road, this story ends abruptly leaving you thinking ‘Oh, is that it?’