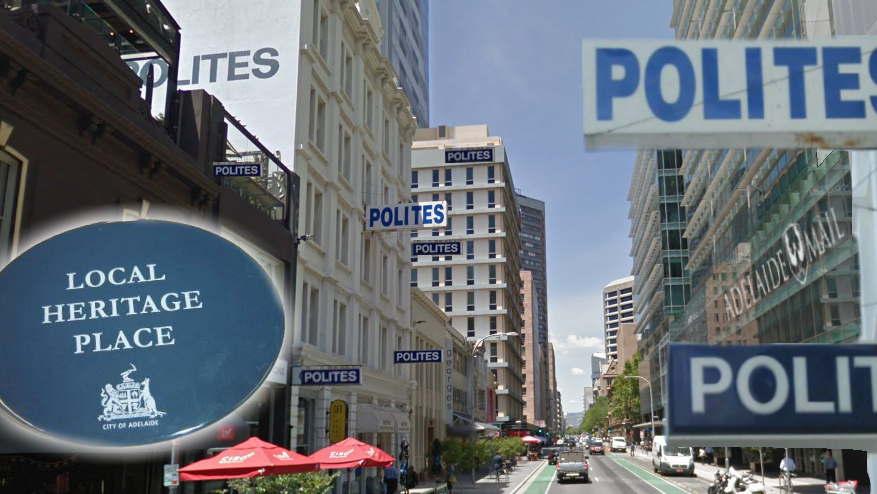 In a surprising move by the SA Heritage Listing Council, it has been deemed that each and every Polites building will be heritage listed next year.

Comprising of approximately 76% of all CBD buildings, 89% of South Australia’s white paint usage, and 92% of the Adelaide metropolitan area’s rising salt-damp, the Heritage Council has deemed that Polites buildings have been an iconic part of Adelaide ever since Con Polites proudly put the Polites name to his first neglected block of apartments.

Speaking on behalf of the Heritage Listing Council, Bill Derr stated ‘There’s nothing more recognisable to Adelaide’s CBD and surrounds than the big blue Polites signs. For one, they’re everywhere, and second, they’re a great representation of how governing bodies will look the other way when there’s money involved, a true South Australian tradition’.

The surprise Heritage listing has been widely welcomed by the Polites family and their stakeholders. Speaking exclusively to Adelaide Mail from one of the hundred Hindley Steet Polites buildings, a completely fictional Polites spokesperson stated ‘This is fantastic news for us’, as they wiped away the crumbling plaster dust from their suit shoulders ‘heritage listing essentially means that we now don’t have to do any repair work on our buildings…not that we ever have previously, but still, great news’ concluded the definitely 100% fictional (we can not stress that enough, we don’t need another Zhivago’s incident) Polites spokesperson.

The Heritage Council says this is the first step in a bold move to Heritage List more South Australian icons over the coming years, including Scotty’s Motel, Adelaide Rams memorabilia, and not keeping left unless overtaking. They will get to these once they make the 4600 little blue plaques required to cover all the Polites buildings.

To hear the absolutely insane story of property tycoon Con Polites, who he was, why the Polites signs, and how many hats he owned, listen to this episode of the AdeLOL podcast. AdeLOL is a comedy podcast exploring hilarious stories from South Australia’s unique history.