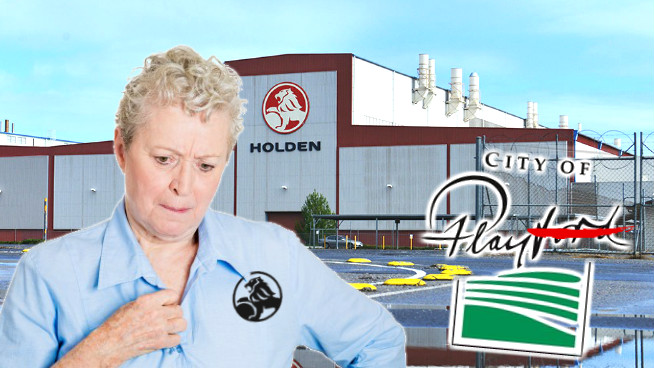 As the third anniversary of the closure of the Holden plant at Elizabeth approaches, lifetime local resident Camira Minnet lobbies the Playford council to change its name to Playholden to honour the contribution of the car manufacturer to the local community.

Ms Minnet explained, ‘Holden means so much more to the people here than Ford. My father, Holden A. Minnet, and the guy that we think may have been his father worked at the plant, and I always hoped that my twins, Gemini and Torana would work there, if they ever chose to work’.

She has prepared a detailed submission to take to the next Playford council meeting including how this could be achieved with minimal expense.

‘It’s really just a simple rebadge, like the Apollo was just rebadged Camry, and the Cruze was a metal shell over a broken down go-kart. All the council has to do is stick a bunch of stickers over signs and stationery and they’re done’.

The Playford Mayor’s office was approached for comment, but all they offered was a laugh before saying ‘Does she know who the city is named after? Has she even heard of former Premier, Tim Playford? Seriously, can you guys just stop letting numpties get in the news? You know her next plan is to try and rename the local cordial manufacturer down in Salisbury, right?’