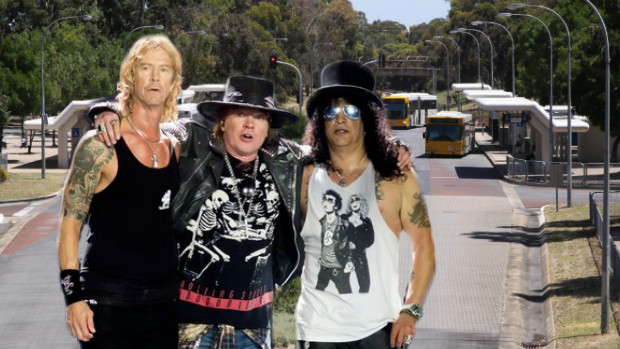 During last year’s world tour, 80’s rock band Guns N’ Roses finally managed to make it to their ultimate destination, located right here in Adelaide. However, Paradise wasn’t all this band thought it could have been.

‘I mean, it’s fine, I guess’, stated frontman Axl Rose ‘we’ve probably just built it up over all these years to be something more than it actually is’.

Bassist Duff was also less than enthused with his visit to the north-eastern suburb ‘we toured Adelaide in summer, and let me tell you, the grass wasn’t green in Paradise City. There wasn’t much green grass anywhere in Adelaide to be honest, looks like you don’t get a whole lot of November rain’.

Slash remarked ‘there were some pretty girls there, but it seems like a lot of them were very  Christian for some reason. It’s not even a city, really, more of a middle-class suburb I’d say’.

After the visit, the band had decided to rewrite the lyrics to their classic hit. Despite Adelaide Mail reporters insisting they really didn’t need to play it to them, Axl and Slash sat down with an acoustic guitar and forcibly lamented the following chorus:

‘Take me down to the Paradise suburb,

where the O-Bahn buses run oh so superb,

Take me down to the Paradise district,

where at Thorndon Park we’ll have a nice picnic,

Take me down to the Paradise municipality,

where at the skate park I’ll pop a pretty sick wheelie,

Take me down to the Paradise region

Where I can be influenced to find religion,

This continued for six and a half minutes, these are just some of the better ones we recall.

Responding to continued questioning from Kasey Chambers, the South Australian Musician Attractiveness Commission has found the songstress to register aesthetics...