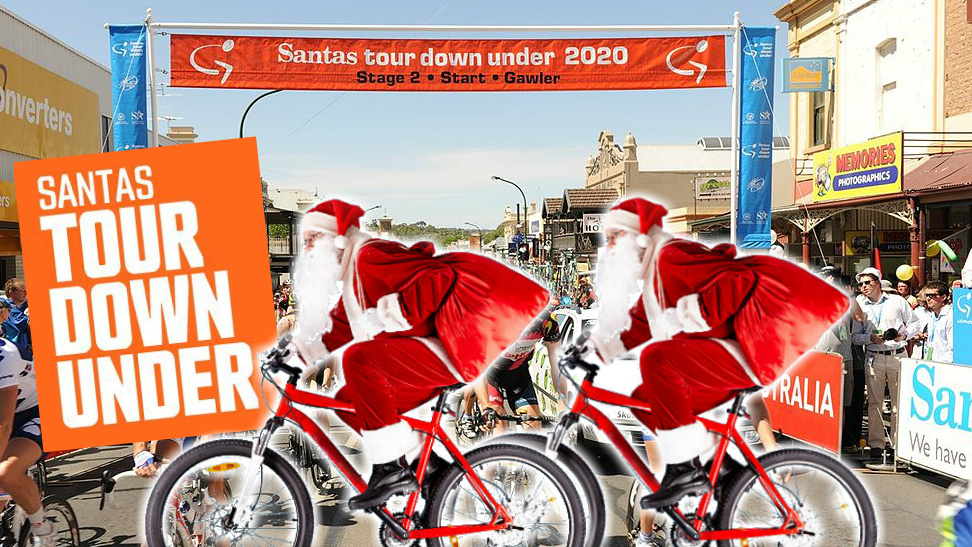 Riding a wave of excitement from the Tour Down Under, the state government are set to add a second cycling road race to the Adelaide sporting calendar this December, “Santa’s Tour Down Under”.

Chief advisor to the Sports Minister, Mr Paulo Tonne said ‘We’ll have a hundred or so people in Santa costumes riding around Adelaide throwing out free gifts, mainly cash and gift vouchers from their sacks to all who they pass by. The call out for riders will be happening soon and it’s a great chance for the less athletic to take home the $200,000 prize money. We encourage anyone with a BMI above 30 who can hold a sack while riding to apply’.

The government has budgeted $2.6 billion for the first two years of the race, $2 billion of which will be for the 2021 race to be held three months before the state election. However, this is still believed to be less than the total fees paid to Lance Armstrong by the previous government.

The route will be radically different to the TDU, which tends to take in only the most beautiful scenery the state has to offer, while Santa’s Tour Down Under will only be going through marginal electorates and past the houses of Liberal party members.

The event will also differ from traditional cycling races with the drinks station being replaced by a buffet where we expect that the soft serve machine will always be broken.

When informed of this new event while having a late afternoon snack of a Vili’s Dog and a Kitchener bun, Labor spokesman, Pinko Komi said ‘Shit. Is this for real? Those bastards. I wish we thought of it. Just a sec, I can ride a bike and have years of experience handling bags of cash and discreetly handing them to the undeserving. Where do I get an application form?’

We look forward to chants of ‘Ho ho ho’ next December in Adelaide streets that have long been absent of ‘ho’s.