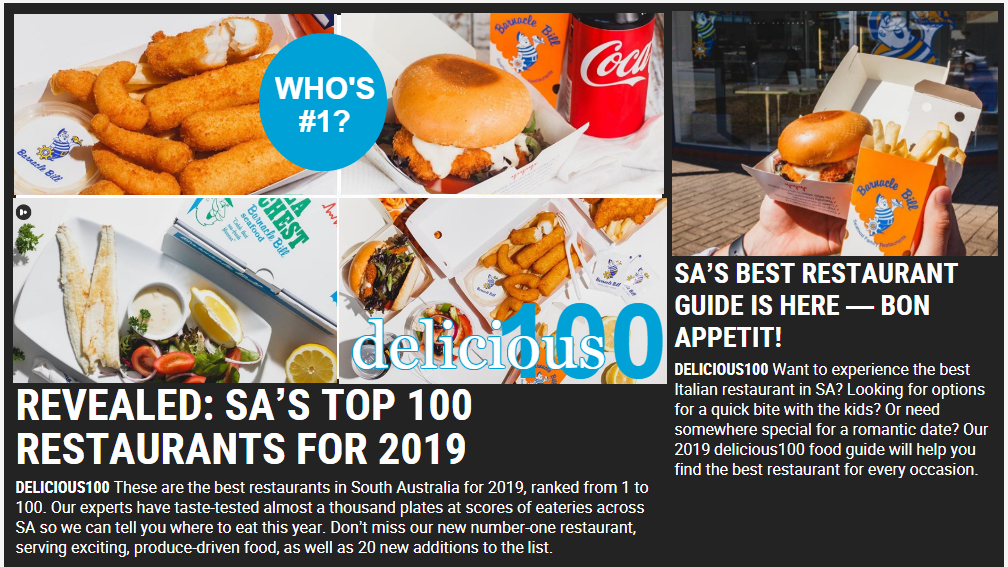 Usually the number one source of fish and chip paper itself, our State’s leading satirical newspaper The Advertiser has surprised a few readers with it’s recent Sunday Mail lift-out of South Australia’s top 100 restaurants.

The top 100 South Australian restaurant guide is also online, however as it’s behind a paywall and you probably don’t wan’t to pay for it because you’re under the age of 70, we’re here to provide a rundown for you.

The list contains the 15 Barnacle Bill store locations throughout South Australia, and then 85 places where you could eat takeaway Barnacle Bill’s. The top 100 list has been deemed by world-leading culinary experts as “frighteningly accurate”.

The number one position was awarded to Holden Hill Barnacle Bill, largely due to their recent expansion into the food delivery service with their “O-Bahnacle Bill” initiative (pictured below), which has successfully challenged Uber Eats to become the top food delivery app in Adelaide’s north-eastern suburbs.

Barnacle Bill’s Director of Innovative Strategies, William Cirriped, stated ‘we be very happy with the result, although we can hardly say we are surprised. Have you ever eaten literally anywhere else? Yuck! I was once forced to eat at Fasta Pasta for an aunt’s birthday, and I still vomit at the sight of Fettuccine Carbonara’.

The number 16 spot on the list was awarded to “An entire Family Feast takeaway to yourself on the couch like the fat slob you are” closely beating out “A Treasure Chest Pack snuck into The Treasury Hotel is life’s ultimate treasure”.

Towards the tail end of the list, it seems that writers may have been struggling for content with “A Burger Bonanza for Breakfast next to the blue lake in Mount Gambier goes alright I guess” in 83rd position, and “Christ, I dunno, maybe a couple of Pineapple Fritters on the Cockle Train would be nice probably” taking out 94th place. Whilst some have criticised the critics for such content, Adelaide Mail can confirm that we have tried these options and expectations were exceeded.

Final position on the list was “A Spoiler for 2 served on a Commodore Spoiler”, which is also known as “a romantic date” in Adelaide’s northern suburbs.

Listen to our exclusive interview with an “O-Bahnacle Bill” delivery rider here in Episode Two of our Podcast: