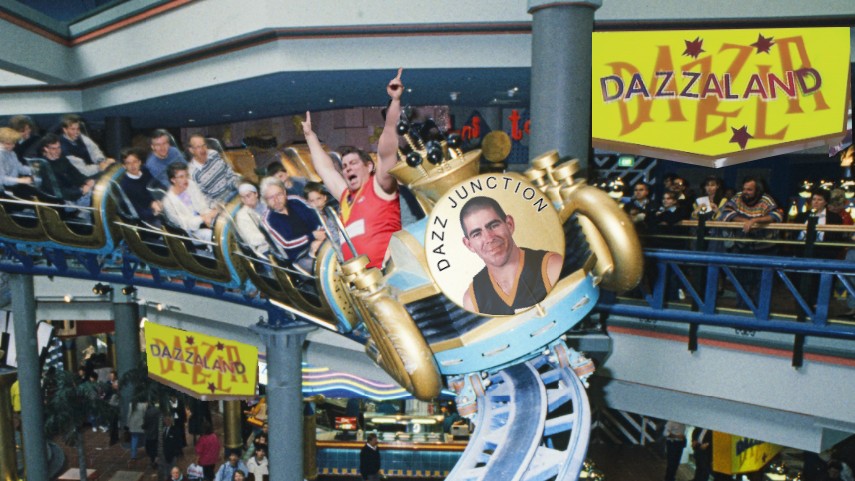 With the top two floors of the Adelaide Myer Centre only now about half as exciting as they used to be, the Centre has announced the development of a new indoor amusement park “Dazzaland”, devoted entirely to ex-Adelaide Crow Darren Jarman, in the space “Dazzeland” used to occupy.

Following the trend of a Scottish Motel, Dazzaland will feature many amusements related to the South Australian Hall of Fame recipient.

A new roller coaster named “Dazz Junction” will open, signifying the ups and downs of his career. From the heights of the dual premierships with the Adelaide Crows, to the lows of not making the finals in the following years, then back to the highs of retirement when he could smash as many beers as he liked.

Spokeswoman for the Adelaide shopping complex, Mya Senna, told Adelaide Mail ‘We’re very excited to bring an amusement park back to our world-class shopping centre. There will be some slight changes from Dazzeland. For instance, instead of the recording of people screaming on the roller coaster, it will be replaced with the audio from the crowd roaring when he kicked that goal while on his back against Richmond. The audio will be on a continuous loop, I’m sure it won’t get annoying for traders or shoppers’.

Other attractions at Dazzaland will include a West End Draught Fountain and a bird sanctuary made up of only Roosters, Hawks and Crows. If successful, a northern-suburbs petting zoo will be opened themed around the other Jarman brother, “Andrew’s Farm”.