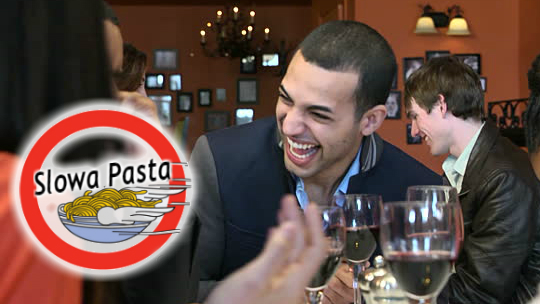 As a group of friends decided to treat themselves 1998’s best dining experience, little did they know what was in store for them as they awaited their meals at the Sefton Park restaurant.

The evening started off as normal, with the party ruining their free fresh bread with rock hard butter as they pretended to consider other menu items rather than the cheapest and most filling option. Three minutes after placing their order, one of the increasingly impatient friends, Michael Cracker, drew the table to a hush. Michael then made the group lean in closer as he said, in a voice slightly louder than a whisper ‘Hey guys, hey…more like “slowa pasta”, right?’.

This sent the group into an absolute frenzy of tumultuous laughter, the deafening uproar could be heard throughout the restaurant. Drawing the attention of other diners, a woman from the next table shouted ‘what’s so funny?’, focusing the entire patronage on Michael, to which he replied with perfect comedic timing ‘Well, well. I see you’re still waiting for your meal too, perhaps they should call this place…“Slowa Pasta”’.

Those in attendance, lucky enough to witness the world’s greatest moment in comedy, let out such a unified thunderous belly laugh, that all of the restaurants wine glasses and exterior windows simultaneously shattered, sending a shockwave throughout Sefton Park and parts of Mannigham.

What happened next is what sociologists are describing as a state of prolonged mass hysteria. Diners were rolling along the floor, speaking in tongues, cackling into convulsions, and several were stomping on tables manically chanting “SLO-WA PAS-TA, SLO-WA PAS-TA”. Eventually the crowd of family diners formed a mob and started taking to the streets and rioting, moving north to Kilburn where they caused upwards of $25,000 worth of property improvements.

Riot police and ambulances were called to the scene in an attempt to control the crowd, but as news of Michael’s perfect punchline spread, they too joined the unruly assemblage, taking over the inner-north suburbs.

Over the past few days, residents of Clearview and Manningham have started to emerge from their barricaded homes as life has gradually returned to normal, however Sefton Park and parts of Blair Athol still remain under military lockdown.

As for Michael, he will become the sole host of Mix 102.3’s breakfast program and is expected to announce a headline 2022 Adelaide Fringe show with opening act Arj Barker. Tickets have somehow already sold out.