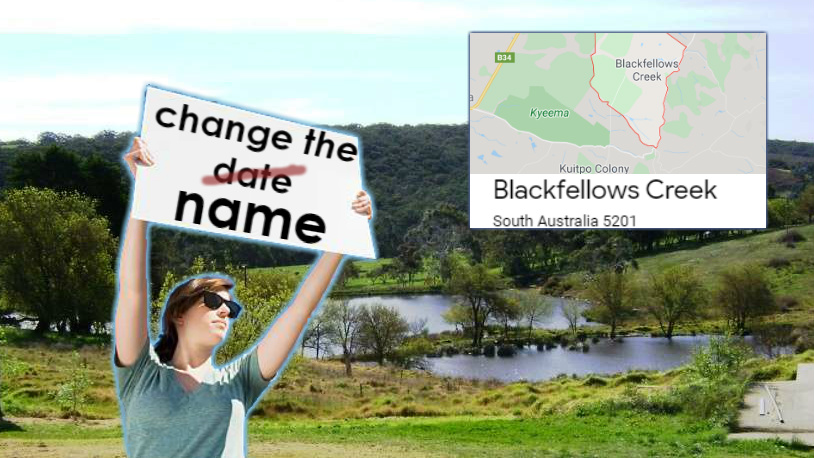 With discussions of changing the date of Australia Day firing up once again, some South Australians are focusing their energy on a local issue, rallying against the name of an area in the Adelaide Hills, which has been deemed as “slightly racist” by some and “overtly racist” by many.

A petition has been launched by first year Social Work uni student Lacinta Chripplejay, who stumbled across the area in Google Maps, because despite extensive international holidays with her family, has never been more than 10km from her family’s Unley home in South Australia.

‘I needed a topic for my “Uninformed Outrage” subject, so I typed in “Black” in Google Maps’, stated Lacinta Chripplejay, ‘First I wanted to lodge a complaint against the suburb of ‘Blackwood’ for not putting a trigger warning before their name. I’m still suffering PTSD from the burnt wood smell stuck to my Camilla dress after the Adelaide Hills fires, but then I found something much worse’.

Blackfellows Creek is a small South Australian Rural Location within the local government area of Alexandrina, located approximately 38kms from Adelaide, with only about thirty residents.

Adelaide Mail contacted Blackfellows Creek’s resident historian and avid Advertiser reader Gary Wrightwing, who stated ‘Well as far as I’m concerned it’s a stupid idea to bloody change the name of something. It’s been called that for nearly 200 years, why would they want to change it? This always was and always will be Blackfellows Creek. Yell it with me now, always was, always will be Bla-, c’mon say it like you mean it. Always was, alwa-’.

Gary then proceeded to show us his collection of Golliwog dolls whilst Kevin Bloody Wilson’s “Living Next Door To Alan” played on repeat in the background. ‘Here’s the thing’, yelled Gary over his CD player ‘things like Blackfellows Creek and Australia Day are traditions. This stuff has been around since at least the 1990’s, now all these darn greenie-lefties want to change what I’ve always known, just because of the traumatic genocide and entrenched prejudice against an entire race. How dare they, if the lefties don’t love it, they can leave! Same with the Aboriginal people, they should also go back to where they came fr-, wait, actually don’t quote me on that part. Besides, Blackfellows Creek isn’t racist in any way, you need to look up the true origins of the name’.

Always was, always will be Blackfellows Creek!

Upon further research by Adelaide Mail, Blackfellows Creek was named after colonial explorer/murderer William Black, who stated in his diary ‘I stumbled upon a creek after getting lost looking for ‘shrooms in Kuitpo forest. Some of the friendly native men saw I was thirsty and offered me a drink. I told them I would name this creek after them. I believe they were trying to tell me they already had a name for it since before the beginning of time, but I insisted as I am much whiter, and therefore smarter than they. Thus I named it “Blackfellows Creek”, for the fellows I made there. Don’t worry, it’s cool, they said I can say that word”.