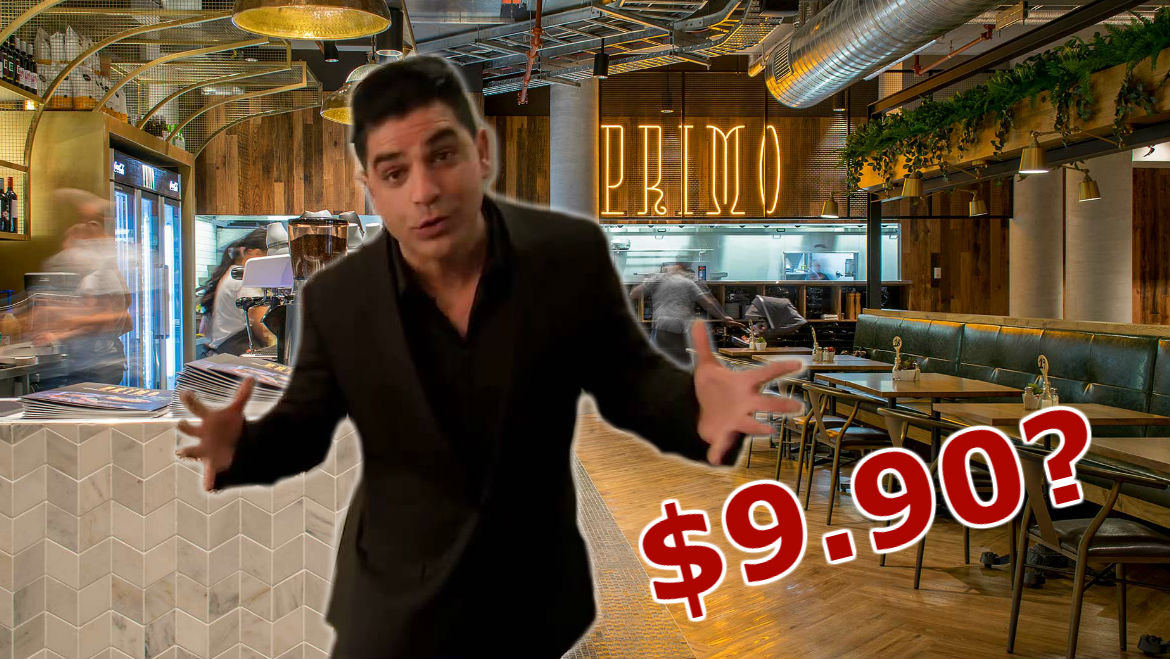 Despite not having a $9.90 menu or the iconic South Australian television commercial for several years, there is one person who feels he could still rock up to any Caffe Primo and land a classic deal.

South Australia’s self-crowned king of the haggle, Vafa Barterolli, let the Adelaide Mail in with the exclusive bargaining secrets he will employ in an attempt to get a moderately reduced dinner.

‘When it comes to the haggling mantra, timing is everything. First off, it’s important to go in at the end of the month. Like car salesmen and whitegoods retailers, I assume the teenage wait staff at the restaurant have monthly sales targets and will be desperate to hit them, which will let me walk away with a steal. Second hot tip, go in at the end of the night, they’re going to want to get rid of stock cheap before the next day’s delivery comes. Third, in my mind, end of financial year bargains don’t just apply to office stationery and last season’s clothing, it definitely also applies to food, probably. Now come on, I’m going to show you boys a lesson’.

With that, Vafa invited us to dine with him at the Tea Tree Plaza Caffe Primo at 9pm on Sunday the 30th of June to see this “master of the barter” (he told us several times to make sure we wrote that down) in action.

Sitting down as most diners were finishing their dessert, we were instructed by Vafa not to look at the menu at all. ‘Don’t show even the slightest bit of interest in the food. Implying you’re happy to look elsewhere to invest your money is a smart move that will get them to bring out their best offers’.

When sharply urged by the waiter 45 minutes later that we had to order now as the kitchen was closing and staff wanted to go home, Vafa quipped to us ‘See, they really want that sale. Shmucks here I tell ya’. We’ve got them right where we want them, boys’.

We spent the next half hour watching Vafa in his element trying every haggling trick in the book attempting to get a $9.90 Penne Alla Panna. Everything from “I know the owner” and “My cousin works here” to “Don’t you know who I am?” and “Come by the Parafield store tomorrow and I’ll hook you up with the best deal on a rug in town” were dropped in conversation between various Haggle Co jingles being recited.

Eventually, with both parties admitting defeat, and the waiter somewhat enticed by a cheap Persian hall-runner, Vafa and the waiter finally settled on the Shop-A-Docket Pizza Special with some leftover garlic bread that we’re pretty confident came from another table.

Not one to show any loss, Vafa Barterolli concluded ‘Another haggling triumph! Look, in the end, I couldn’t get them down to the classic $9.90, but my bartering efforts definitely weren’t wasted. I didn’t even have the Shop-A-Docket voucher! And just on the down-low, they gave me this free takeaway pancake. Pretty good, hey? I’m pretty sure not every customer gets that, although mine does seem to be topped with what seems like a mix of golden syrup and saliva. Now, who’s keen to kick on? You’ve learnt the art of the haggle, so I reckon you could get us some 30 cent softserve cones from the Ridgehaven Hungry Jacks’.