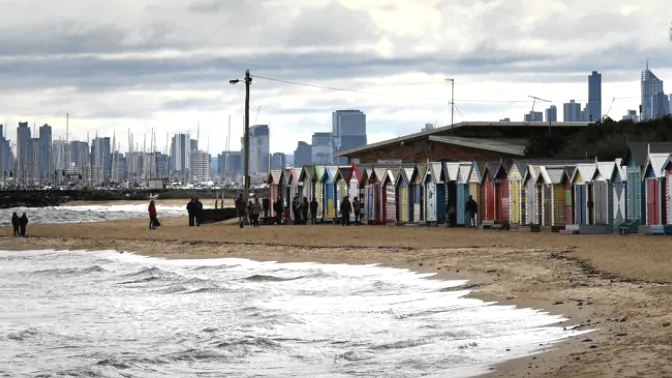 In a city where locals will constantly remind you it’s “world’s most livable” and also frequently awarded “world’s most consistently overcast”, Melbourne certainly has a lot going for it.

Whether it be the glistening plastic along the Yarra shoreline, $800 weekly rents for run-down two-bedders, or the charming petty street crime, Melbourne is definitely “livable” in the same sense that Mars may also be some day.

But where Melbourne really seems to shine is its stunning array of beaches (when we stay “stunning” we mean alike a self-defence electroshock weapon aimed at temporarily disrupting muscle functions whilst inflicting pain on the recipient).

Take, for example, one of Melbourne’s most iconic and popular beaches, Brighton (pictured). With up to 6 metres of pristine grey sand between the murky green water and the road, Brighton “Beach” certainly makes the best use of its city views by reminding beachgoes they’d rather be sitting in their office.

To distract the eye from the random stobie (sorry, “telegraph”) poles in the bay and rubbish entwined seaweed, a quaint row of rotting “bathing boxes” (which one can only assume are some sort of crack-dens for vagrants) have been painted in a range of noxious neon hues in an effort to bring some colour into an otherwise dreary scene.

Speaking with the Director of Serenity for Melbourne’s “Beaches”, Frank Stone, he stated ‘Yeah, Brighton is definitely one of the good ones. So popular, in fact, that it can be quite difficult to find a spot on the four days of the year we have beach weather’.

To be fair, we also tried to research Melbourne’s best beaches, which led us to this article by the Herald Sun (their version of Adelaide Mail), which states (we shit you not):

If only they could keep their cricket pitch looking this good.