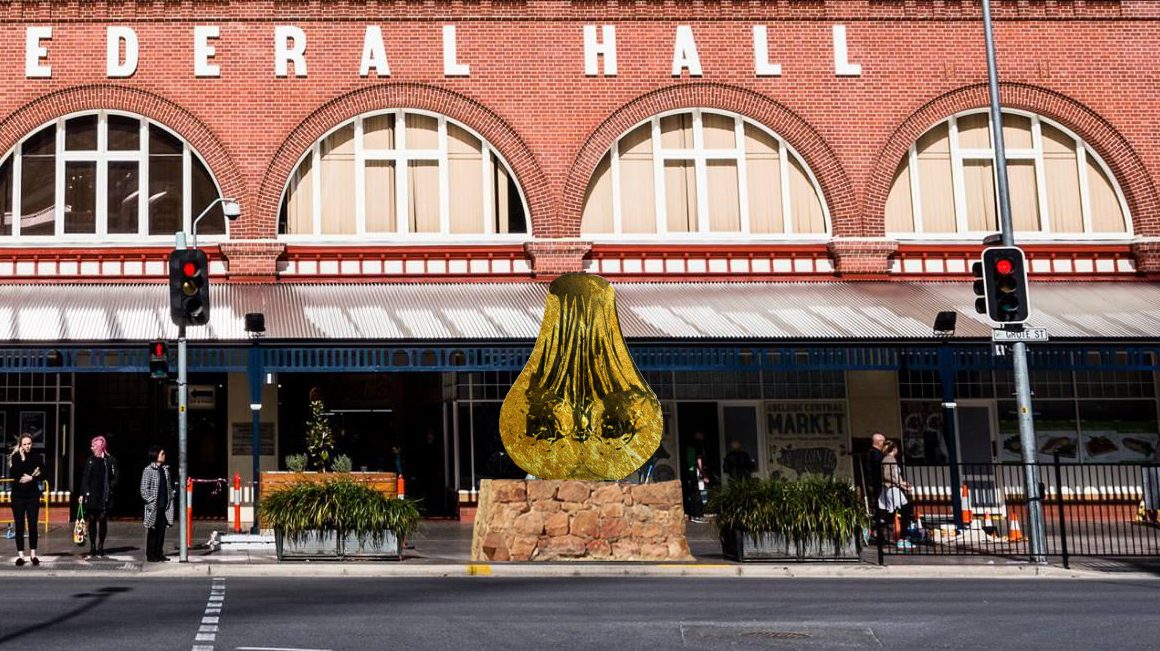 With the successful unveiling of the new pigeon statue in Rundle Mall last week, Adelaide City Council has promptly commissioned another public sculpture.

In an effort to boost tourism and increase the number of visitors to the Central Market precinct, the Adelaide City Council have unveiled a large gold scrotum sculpture, aptly named the “Grote Scrote”.

Adelaide City Councillor Ryder Balzac made the announcement on Grote Street in front of the Central Market this morning.

‘Mate, we need to get more bums on seats here and this is just the sort of thing that will get people talking. A lot of people are going on about the pigeon and everyone loves the Malls Balls, so this was the seemingly logical thing to do’.

When asked about the intense yellow colour of the sculpture, Cr Balzac replied ‘It’s solid 24 carat gold. Sure, it wasn’t cheap but everyone in the market goes for the bling bling’.

Our reporter asked if the Council could have instead considered rate relief for traders or perhaps a publicity campaign to try and attract more people to the Central Market.

‘Nah mate, that’s bollocks. It’s all about gimmicks and stunts these days, there’s no better form of marketing than these bad boys!’ he replied, loudly slapping the sculpture several times.

‘Once this sack of gold draws them in, everyone will naturally go for a wander through the markets to have a look at all of the stalls, the food court, that bloke who fixes the shoes, the restaurants, the food sellers, the Coles and the food court’.

When asked about the cost of the sculpture and why actual gold was used in its construction, Cr Balzac promptly replied ‘But seriously, have you actually TRIED lemon chicken? That shit is amazing, I swear to God it’s changed my life’.

Cr Balzac licked his lips and a glazed look came over his eyes. He then walked away, terminating the interview. He was last seen walking briskly in the direction of the market plaza food court, mildly sweating.

Note: Thanks to one of our readers, David Knight, for this contribution. In return he’s asked us to promote the Blackwood Lions Club, which we won’t do because we’re Crows supporters.