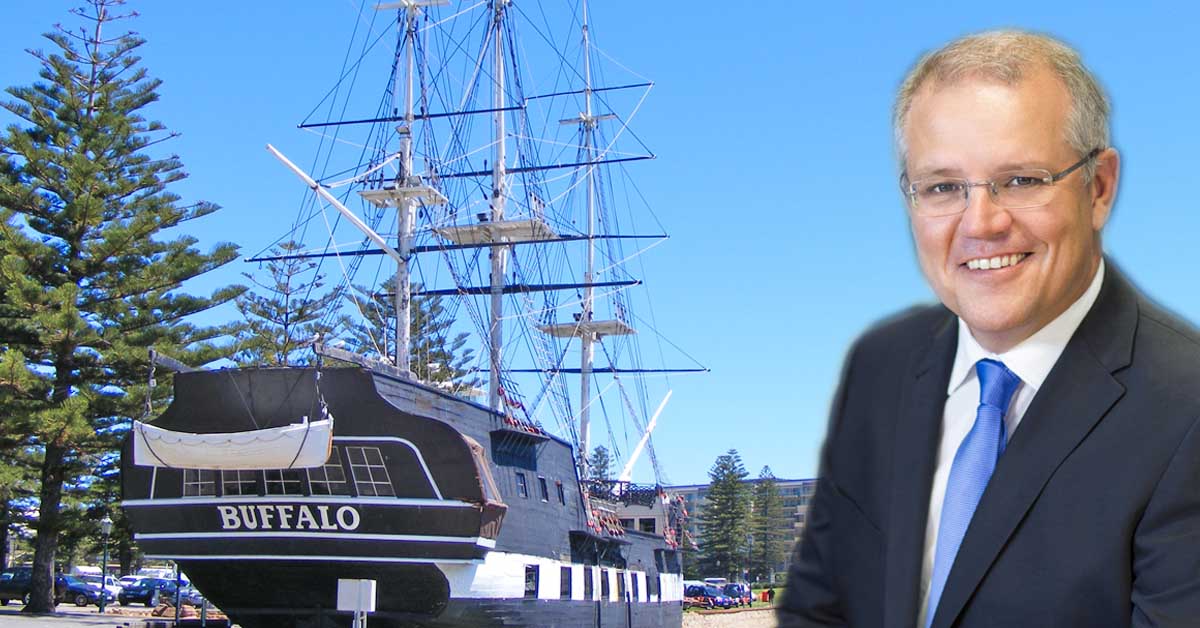 Prime Minister Scott Morrison has taken credit for stopping the land-bound, abandoned restaurant the HMS Buffalo while on a whistle-stop trip to Adelaide.

The Buffalo — a non-operational replica of a 19th Century Royal Navy storeship sitting on the banks of the Patawalonga River — serves as a deterrent to those considering taking their lives into their hands by dining on questionably-refrigerated seafood.

As part of his tour of Glenelg, the PM told Adelaide Mail ‘this boat here is another example of the hard-won success of Operation Sovereign Borders. We must be careful because a single act of compassion could see 20 or 30 diners being let into this country from…wherever it is this ship came from’.

‘We will decide who dines in our novelty maritime-themed restaurants and the circumstances in which they dine’, Morrison continued.

However, some are critical of the government for not actually stopping boats like the Buffalo but merely ceasing to report on examples of them arriving in our suburbs.

Louis Kitseltom from activist group GetUp! told the Mail ‘the fact is we don’t know how many replica boat restaurants are popping up around Adelaide because the government won’t tell us. We could have a theatre restaurant being constructed on a paddle steamer in Murray Bridge right now and the government would tell us that there is no paddle steamer’.

‘If you want an open door policy on moored, unseaworthy boat restaurants, then by all means, vote Labor at the next election’, said Morrison. ‘But a Scott Morrison-led government will never allow a Buffalo like this on any suburban body of water’.

The PM also hinted that he will next turn his sights toward those paddle boats on the Torrens, labelling them a ‘risk to the fabric of our sovereign nation’.