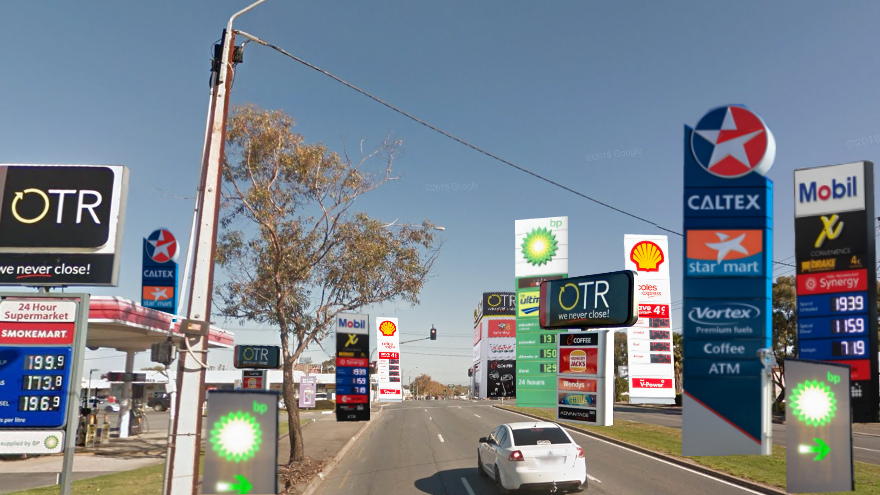 With sections of the major arterial road clearly already overly saturated with fuel outlets and many motorists remarking ‘Wait, they’re building another one there? Why?”, it seems that it will only be a matter of time before Adelaide sees an end to all the other shops, car-dealerships and dodgy looking hydroponic stores that once graced this great road.

Adelaide Mail spoke with OTR’s vice-chief of monopolisation Pricey Gazoleen, who stated ‘This isn’t our fault, initially we were just happy to have a station on every single corner. But now that some competitors are popping up, it’s our company policy to build two more stores, one either side of their new store, it’s simple economics’.

“What will anyone need Tea Tree Plaza for? OTR has everything you need”

‘Okay, see all those car washing places around Klemzig and Windsor Gardens, they’ll be next to go, we’ve got automatic car washes at OTR, you know the ones with those big old spinning hard brushes?…Well, if you could just let me finish, those scratches were probably already on your car before you drove in mate’.

Pricey then pointed to some illegible black biro markings on a dried mustard stain ‘Right here there’s an Officeworks and an Autobarn, those can clearly go too, we sell pencils and replacement brake-light bulbs, so they’re off the list. Then you’ve got these suss looking massage places that keep cropping up, they’ll be incorporated into the corners of some of our larger stations if there is room next to the Wok-in-a-box. We figure if that place in Keswick could do it, so could we’.

When queried by the Adelaide Mail as to what will happen to Tea Tree Plaza, Pricey replied ‘Plaza?! What will anyone need a Plaza for? OTR’s provide a superior high-end shopping experience that rivals any Westfield. You name it, we got it all, food outlets, goods, keno, it’s all there. Plus, just like TTP, we even obnoxious teenagers hanging around doing nothing, they’re our staff’.