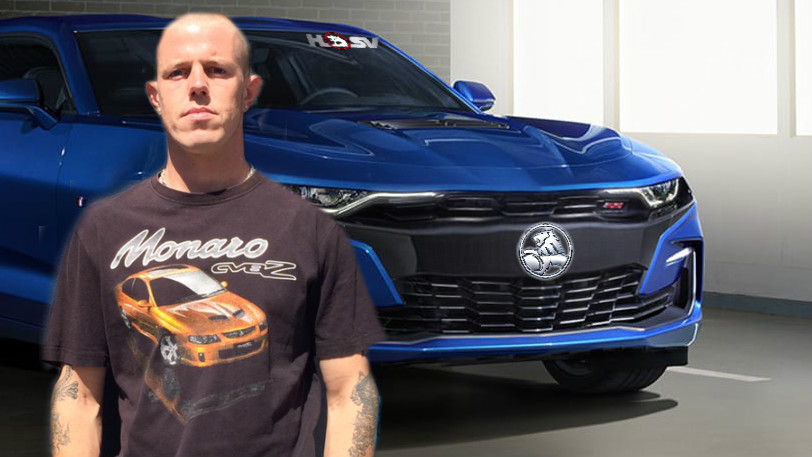 With the release of American muscle-car the Chevrolet Camaro to Australia, avid Holden fan Beau Ghan was excited to somehow get finance approved for purchase of the $89,000 vehicle. However, the first thing Beau did to the Chevrolet was undertake a sub-par re-badging job in his garage.

‘Yep, as soon as I rolled it into my driveway, got the chisel and epoxy out to chuck a Holden badge on it’, said Beau. As Beau, alike many other Holden drivers, had always badged their Commodores with third-party Chevrolet badges for some unknown reason, he was lucky enough to have a surplus of Holden badges lying around.

‘This one came from my old VL Commie’, said Beau ‘even though it was an Australian car with a Nissan engine, I still thought it definitely needed a Chevy badge. Same with me missuses Barina, Chevy badge and sticker. Also, my son got one of those little remote control Carreras from Clipsal, I put a Chevy badge on it. Got a Holden beach towel for Christmas one year, took a six month sewing course and put a Chevy logo over it. Went and got a Holden tattoo, then instantly asked for a cover up job with the Chevy logo’.

But now, with the introduction of real Chevrolets to Australia, Beau has had a sudden change of heart towards the Chevrolet brand, ‘what they’re doing with these cars is an outrage, you know it’s basically a HSV and they’re trying to Americanise our Aussie culture, this is why I’ve got to put a Holden badge on this car’.

Beau then sold the Chevy badge on Gumtree to a guy in the northern suburbs who had just bought an Astra hatch.