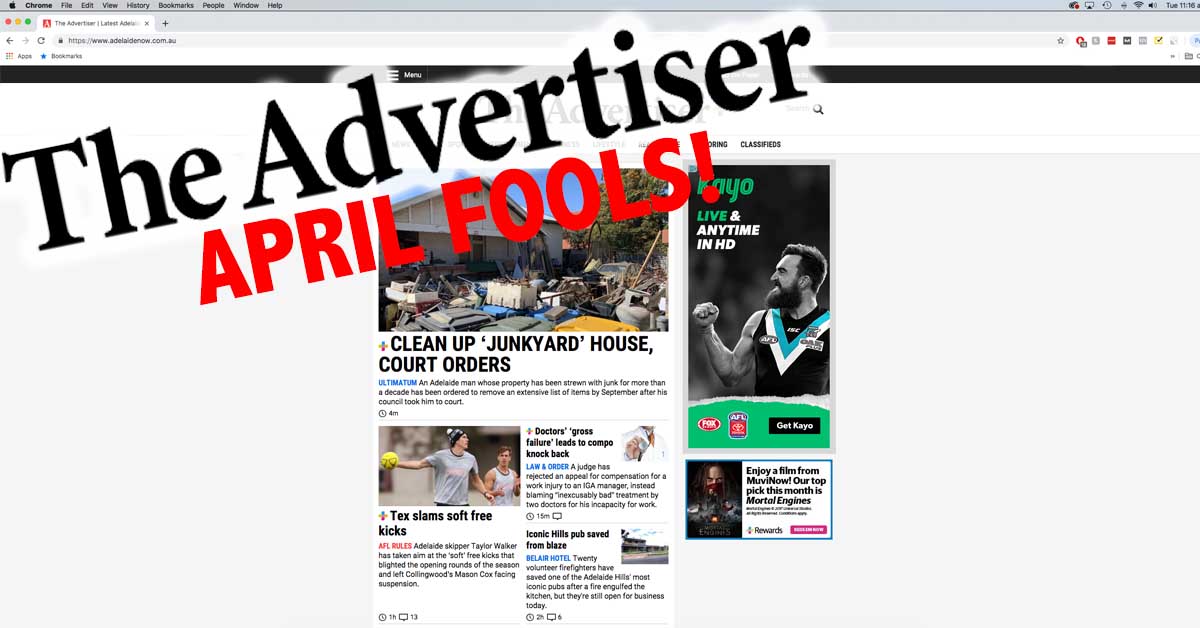 It is a publication that has always gone to great lengths to get a laugh from South Australians. From the continued employment of conservative teenage heartthrob Caleb Bond to implementing the world’s most easily circumvented paywall, The Advertiser is one of Australia’s most celebrated sources of satire.

However, readers of yesterday’s news may have noticed something a little off about the stories being covered by the city’s morning tabloid. Instead of the standard hilarious articles about Married at First Sight and Rex Jory selling his beach house, The ‘Tiser printed nothing but heavily fact-checked, level-headed news stories.

But long-time readers need not be alarmed, it’s just another in The ‘Tiser’s long line of brilliant pranks with a return to regular programming in full effect as of this morning.

‘It was just a bit of a wind-up’, says assistant-chief-assistant-editor-in-chief Braille Ararat. ‘But I tell you what, it was a bloody slog’.

‘Do you know how hard it is for a Murdoch paper to print actual news items? You have to find a story, interview people, fact check them, interview other people, find out that your information is dodgy, print it anyway, hack into celebrities’ voicemail accounts, blame the systemic culture of illegal phone hacking on “one rogue reporter”. It’s bloody hard work’.

‘Anyway, it’s good to be back doing what we know best. Printing articles about what Kane Cornes said about Taylor Walker at 6:15am on a radio station nobody listens to’.

Editor’s note: Obviously we’re not suggesting that the people at The Advertiser ever illegally accessed anybody’s voicemail account. As Adelaide’s other satirical newspaper, we see The ‘Tiser as nothing but a bit of friendly, non-threatening competition to us here at Adelaide Mail. There’s a lot of very good journos at The Advertiser and also Michelangelo Rucci.