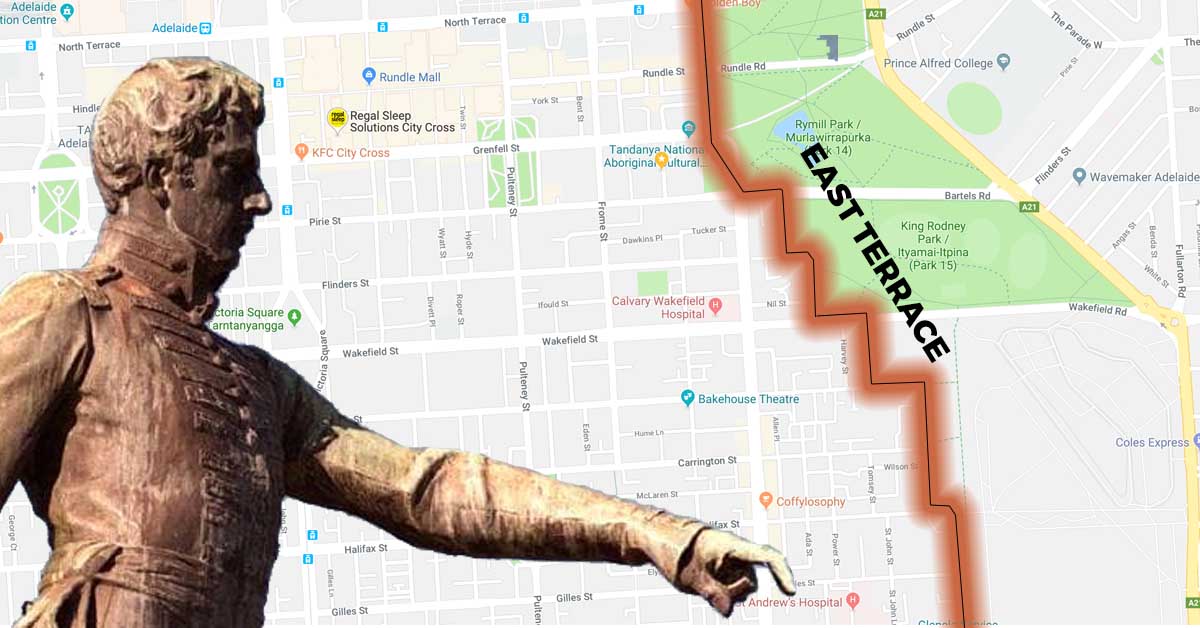 For all the plaudits paid to South Australia’s most famous drawer of grids Colonel William Light, nobody has ever bothered to explain what the deal is with his squiggly rendering of a street that he labelled East Terrace.

While the city’s other self-orientating perimeter streets each travel in one rational direction, East Terrace winds a 90-degree turn-filled path through the eastern parklands. Meanwhile, Hutt Street picks up the slack with a perfectly reasonable north-south bearing.

Now, Adelaide Mail can reveal the true reason behind Colonel Light’s plan for East Terrace, at least according to Ghost Whisperer to Deceased Surveyor’s-General Clancy Lucas.

‘Hold on, hold on, I heard a noise’, Lucas told Adelaide Mail when we met for no discernible reason in a log cabin on an otherwise-vacant lot of land outside Bridgewater. ‘I’ve got something, I’ve got something. Ooh, it’s juicy too. If would like to hear more, it’ll be another thirty dollars’.

Deciding that the carrot dangled was too intriguing to ignore, we successfully conducted a quick whip-around and presented the thirty dollars to the clairvoyant. But once he took our money, he just pretended to be on the phone. We asked him for the information, but he just kept holding up his index finger and waggling it at us.

He wasn’t even on a phone call, we’re pretty sure he was talking into a pop tart.

After about thirty-five minutes of watching Lucas pretend to wrap up his pretend phone conversation, we backed out of the front door and tried to hail a cab.

Oh and it turns out East Terrace had to be crooked because of the terrain or topography or something…we kinda lost interest.