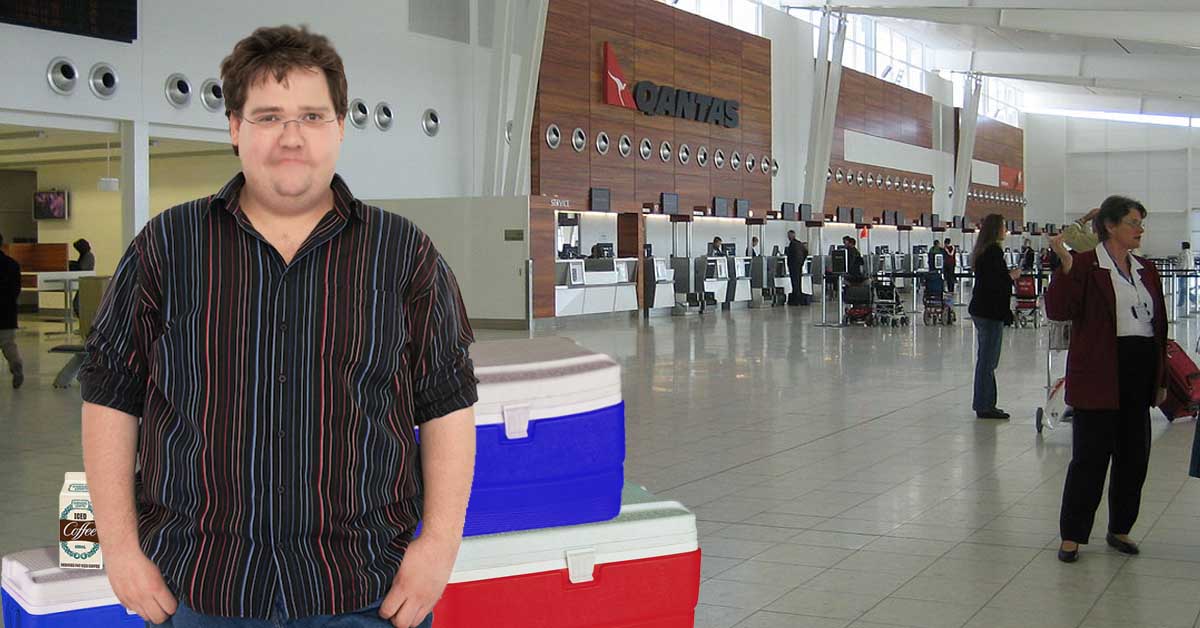 Edwardstown man Pieter Goblettsen loves a Farmer’s Union Iced Coffee, so much so that he is said to have once consumed 12 litres of the flavoured milk drink in one lengthy — and rather jittery — smoke break.

But Goblettsen’s taste for FUIC was tested this morning as he was forced to choose between his beloved drink and a two day, Farmer’s Union-free trip to Perth.

‘I heard that you can’t get Farmer’s Union over there, so I thought I’d bring a little bit along for the trip, totally normal’, says Goblettsen. ‘I did the maths and I worked out that I’d need to be taking about 50 litres to get me through the two days’.

‘That’s about one or two Farmer’s Union’s for every waking hour, a few for the flight over and the flight back. There’s a couple of nightcaps factored in, by which I mean the multiple times through the night that I sleepwalk to the fridge and pour myself an iced coffee’.

‘And of course there’s a good ten litres in there for toilet FUICs’, Pieter continues. ‘If you’ve never had the pleasure of drinking a litre or two of Farmer’s Union Iced Coffee while on the toilet, I say treat yourself. It’s like a shower beer, only milkier. It’s great for me because I do spend a lot of time on the throne for some reason. Doctors can’t work it out’.

In fact, doctors have worked out why Goblettsen spends upwards of four hours each day on the toilet, but he refuses to heed the medical advice.

‘Those quacks have no idea. No idea. If the drink was no good I think I’d be seeing the so-called ill effects by now, wouldn’t I?’ At this point Goblettsen excused himself to inject his ‘midday insulin’ while yelling at passers-by to ‘keep away from his stash’.

Although the passenger’s flight left six hours ago, he remains at the airport deciding whether to leave his beloved iced coffee or embark on a withdrawal-laden trip. He has 32 litres remaining.