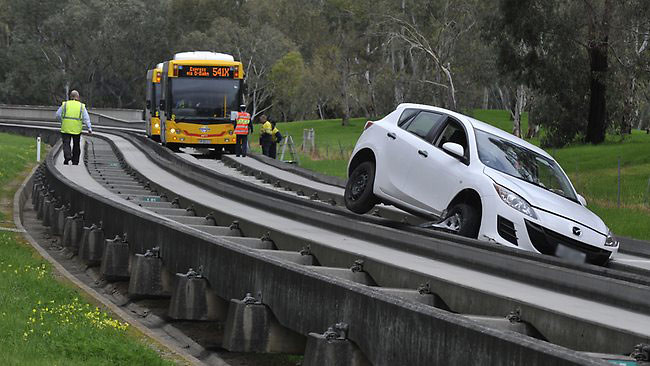 Victorian motorist Ransack Platoon has been labelled as a genius by motoring groups after discovering a shortcut that could spell the end of traffic woes for all North-East commuters.

Platoon was driving out of Adelaide via East Terrace on her way to visit family in Modbury. Running short on time, the motorist was on the lookout for any shortcuts that might trim down the otherwise 25 minute journey.

‘I couldn’t believe my luck’, Platoon told the Adelaide Mail from the back of a flat-bed tow truck, ‘I was just driving along when all of a sudden I see a shortcut appear in front of me. I checked on Google Maps, and sure enough, the road went all the way to Modbury’.

‘I don’t know how everybody else missed this. There are big, flashing lights right near the tunnel to get everyone’s attention, and yet everyone else drives the long way’.

Platoon’s journey along the O-Bahn bus route was cut short when her car’s oil sump was ripped out by a track safety feature, rendering the Mazda even more worthless. The Victorian, however, refused to let a non-operational vehicle dampen her spirits.

‘I’ll be back, probably with my Land Cruiser next time’.

To learn more about the hilarious history of the Adelaide O-Bahn, have a listen to this episode of AdeLOL, a comedy podcast covering South Australian history in a unique way: