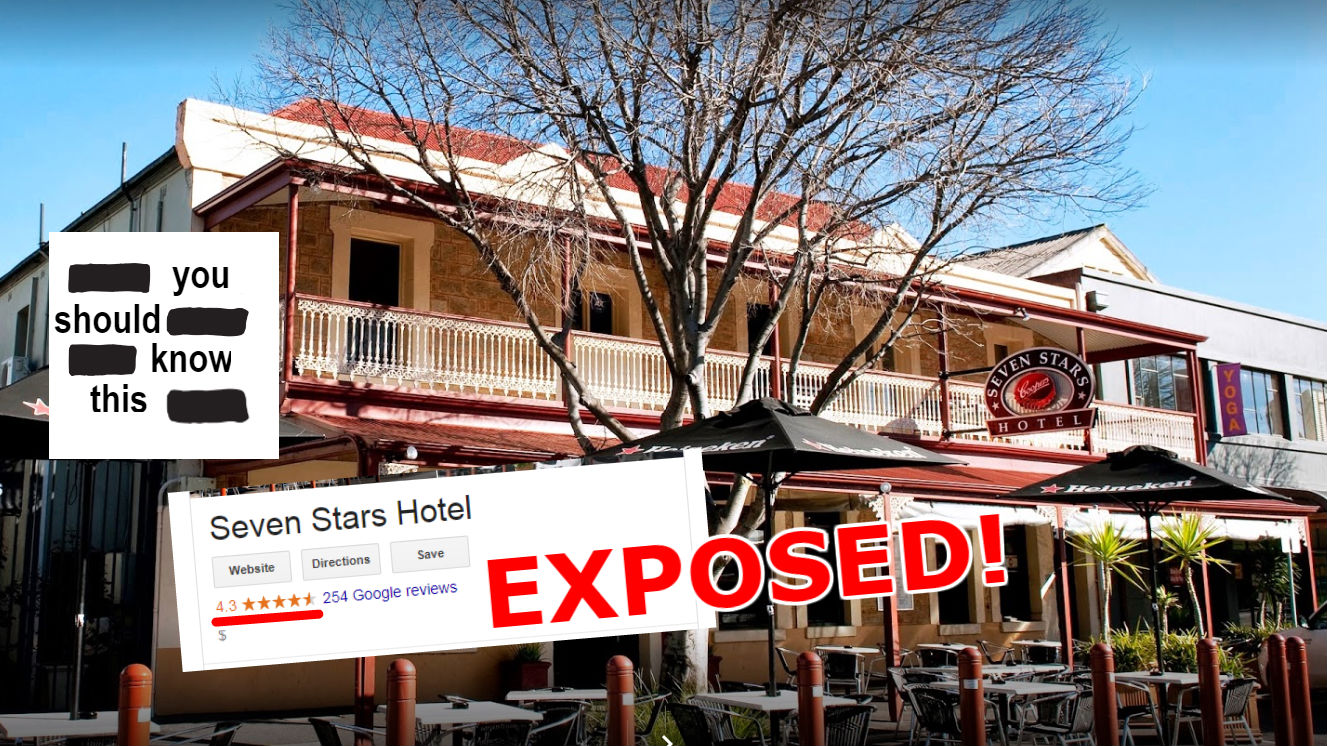 Unnamed sources have brought to our knowledge that one of the CBD’s better pubs has been falsely giving consumers the impression their establishment exceeds official standardised star ratings by two whole stars, putting itself on par with Dubai’s Burj Al Arab hotel.

However, a nine-month undercover investigation by Adelaide Mail journalists, which was later confirmed by a minute-long Google search, reveals that this is in-fact not the case.

It appears that the so-called Seven Stars Hotel, only has an average of a 4.3 star rating from over 250 people. Whilst this is admittedly still a very good average, particularly when you take into account boomers who rated it low stating “never been.., why you asked me,…” and “just went for meeting”, the hotel is clearly misleading the Adelaide public.

We contacted the so-called “Seven Stars” for comment, to which they replied ‘this hotel has been here and called this since the 1850’s, whereas the standardised star-rating system did not come into place until over 100 years later in the 1960’s. Clearly this is just the name of the hotel and in no way implies that we exceed the standardised star-rating. This is obviously a non-matter and you’re probably just looking for a story you can run on a slow news day in Adelaide’.

The Adelaide Mail deny these claims and find this explanation completely unreasonable. We in turn demanded that the hotel either change its name to “The 4.3 Stars Hotel” or lift its standard by including a roof-top swimming pool, a butler for every patron, a helipad and international performers appearing on a weekly basis.

The hotel responded to these demands stating everything will stay the same, but they’ll let us have half a platter of arancini balls leftover from a business function if we turn this hit-piece into a positive review. Now that is the kind of hospitality that you don’t get from many pubs in the Adelaide CBD these days.

The arancini balls were still somewhat warm, but tasted divine with a hint of wild mushroom and rosemary. We washed these down with a choice of local cold tap beer from their wide selection behind the modern, yet laid-back and relaxing, bar.

A hotel that truly lives up to its name with great service, quality food and an exciting atmosphere, the Adelaide Mail rates The Seven Stars 7 out of 5.