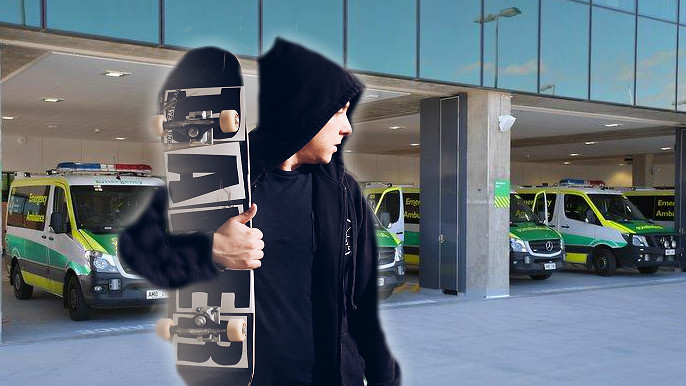 Dozens of skateboarders gathered outside the Royal Adelaide Hospital Emergency Department yesterday as news spread about a new ramp near North Terrace, only to be met with disappointed.

‘Someone’s clearly got the wrong message when they heard “sick ramping”’, said local skater Ollie Manuel ‘we all rocked up and there was just a bunch of ambulances’.

Since the North Terrace skatepark was demolished to make way for the hospital, skaters have desperately been looking for a new spot.

‘Well, we had to make the most of it since we all rocked up’, continued Ollie ‘so we started skating in and around the hospital, it was pretty cool until some guy was all like “you can’t grind on the bedsides”, sheesh, chill out man, I thought Oncology was some sort of trick’.

When asked about the ramping, the Health Minister stated ‘this is clearly a real problem for the public health system, and we’re working very hard to rectify it. We aim to have at least a half-pipe and maybe some grind poles installed in the ramping area by 2020’.