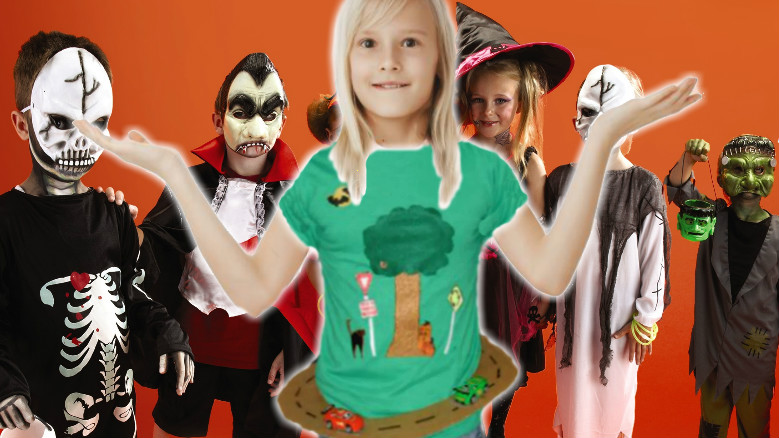 Britani-AHH!!: Adelaide held its annual scariest Halloween costume contest this morning, with thousands of children from all around the state gathered in VictoriAH Park for a chance to be deemed the spookiest.

From goblins and ghosts, to ghouls and Garry McIntosh, there were plenty of ghastly costumes gathered in the garden, but one costume was deemed much more terrifying than the rest.

Nine year old Dulwich resident, Brittany R. Aundebaut, took something that terrifies many South Australians to a whole new level. Her Britannia Roundabout costume caused more than a stir this morning, so much so that many of the other attendees were going to great lengths to actively avoid her completely. Parents were seen ushering their children away from Brittany, with some actually walking their children on an alternative route via West Terrace and through the CBD just so they could enter Victoria Park on the other side.

Her roundabout costume, fashioned from paper mache made from thousands of third party motor insurance claims, beat out all other costumes much to the dismay of many eastern suburbs mothers who had spent a small fortune on something their kid will wear for a total of 45 minutes.

The contest judges, a painfully unfunny local breakfast-radio duo (you know the ones), stated they had never seen a costume so scary and then laughed manically at nothing for about 20 seconds. As one of the judges hesitantly tried to approach Brittany to hand her the prize, they failed to look to their right and were unfortunately tripped by a child dressed as the ghost of Adelaide’s car manufacturing industry.

Runner up prizes for the costume contest included a boy on stilts dressed as SA’s current unemployment rate, the Murray Bunyip, and to someone who was initially believed to be a dressed as a zombie, but was later revealed just to be Neil Kerley out on his morning walk.

Editor’s note: Hey you! Thanks for reading this far, we really appreciate it. For more local “news” check out our “funny” podcast Adelaide Mail Tonight too: