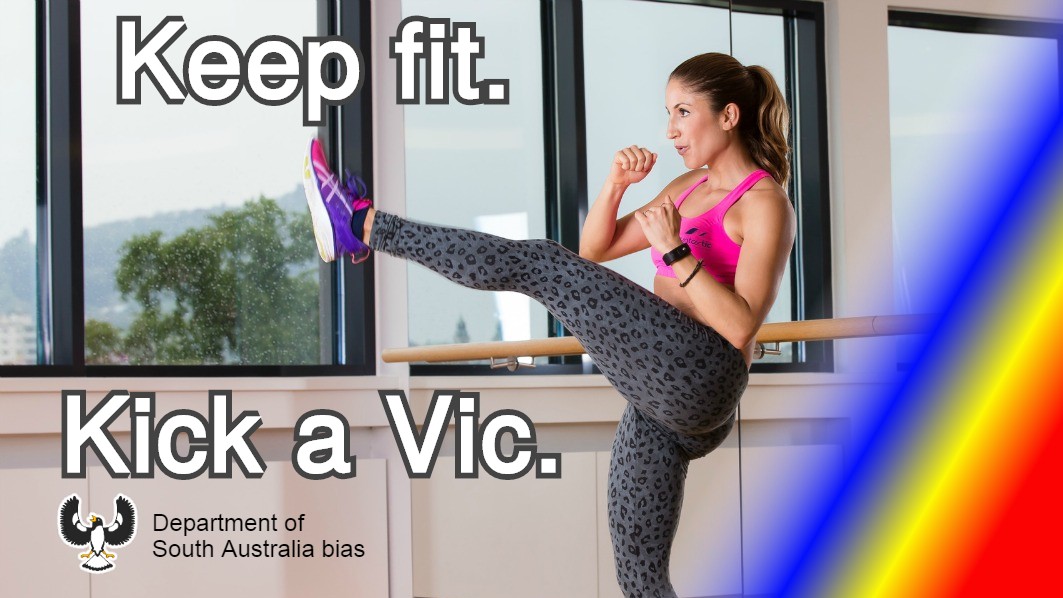 Despite causing controversy when first introduced to promote State of Origin in 1983, the South Australian government plans to reintroduce the classic ‘Kick a Vic’ slogan for 2020.

‘It certainly doesn’t jibe well with these PC times that we live in, but the reality is that in 2020, it’s the safest approach to public health.’

“It’s the only way to manage them at this point.”

Critics from the Opposition party have pointed out that the introduction of this new health policy initiative may cause further confusion for South Australians who are already struggling to follow complex social distancing and health advice.

‘Look, were not against kicking Victorians. At this point, it seems like common sense when you look at what they’re doing over there’, said opposition MP Leonie Pinko.

‘Our concern is that it may contravene advice to stay 1.5 metres away from everyone at all times. This new approach could only really work for professional basketball players or people with really long legs.’

Government policy makers have responded by suggesting members of the public could “Kick a Vic” using an improvised kicking device (IKD), such as a thong tied to the end of a broom handle, or that oversized boot from the 1995 Simpsons episode “Bart vs Australia”.

Other critics have pointed out that the policy, although clearly well intentioned, is unnecessary with current border restrictions in place.

‘It’s true that there’s hardly any Vics here at present,’ remarked Shadenfreude when questioned on the matter.

‘But it’s good for the public to be well prepared on what to do…just in case one of them does slip through’.

Public health officials are also adamant that the reintroduction of the catch-cry has everything to do with public health, and nothing at all to do with old, and arguably irrational, regional rivalries.

‘I mean, they did nick the Grand Prix’, noted the Minister for Public Health in State Parliament this morning.

‘But nah Mr Speaker, this is all about keeping South Australians safe. So make sure you kick a Victorian if you get the chance. Don’t spit on them though, that contravenes COVID-19 guidelines.’