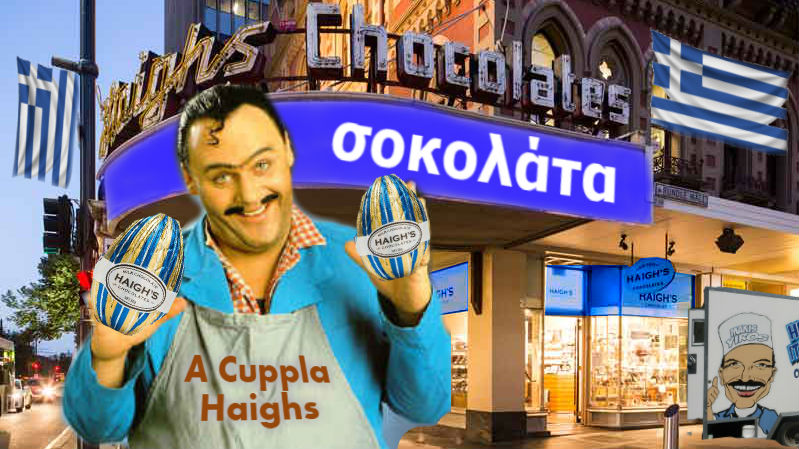 With the traditional Christian-Easter done and dusted and most of Adelaide in a pre-diabetic state, iconic chocolatiers Haigh’s have undertaken a hasty re-brand of their Adelaide stores in an attempt to secure the Greek market.

Assistant vice-chief of marketing, Iva Cocoabean stated that the iconic store frontage and shop interior will ‘go greek’ until next Sunday.

‘We’ve undertaken a lot of market research, and have found that Greek-Australians are typically buying their Easter chocolates at a reduced priced from the chain stores, so we knew something had to be done to attract this market.’ stated Iva.

Based purely on viewing half an episode of Acropolis Now, a Con the Fruiterer skit, and the Con Polites episode of AdeLOL podcast, for the next week, the Rundle Mall Haigh’s store will now run a Lamb Gyros spit and play LCD’s ‘Zorba’s Dance’ club remix on repeat.

‘The lengths we have gone to is quite extraordinary,’ continued Iva ‘in an attempt to gain the market we’ve completely redone the whole store, hired some of those dancing guys in the white dresses and even given our staff lessons in Greek-Austral slang. However, we know what will really attract the Greek crowd is simply lowering the prices of easter eggs for the next “cuppla’-days”.’

If you thought this article was slightly inappropriate, give a listen to AdeLOL’s “Heaps Good History” podcast episode about Con Polites. Sheesh, what a terrible Greek accent.