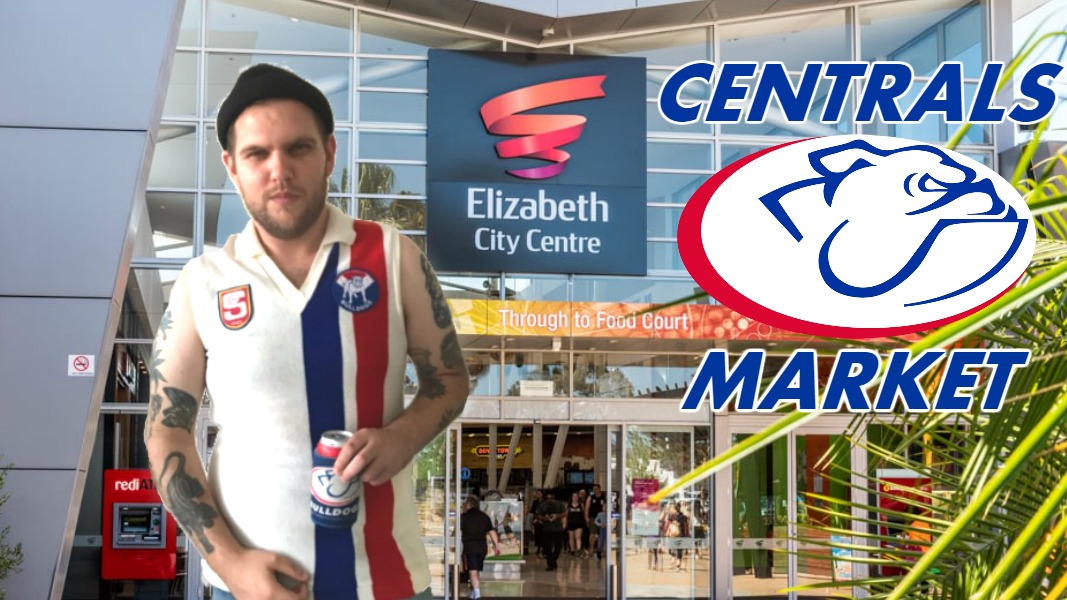 A group of vocal Central District Football Club supporters have launched a rather clever (especially for Centrals fans) campaign to boost team and community morale for the upcoming SANFL season.

Inspired by the recent call to rename Playford to “PlayHolden”, Adelaide Mail spoke with the campaign organiser Cletus Goyudogs about this initiative.

‘It’s been ten years since the last flag, so we want to rally the whole community behind the Doggies this season’, stated Cletus, ‘Plus, if we can boost the economy by tricking tourists into thinking Elizabeth City Centre is the Adelaide Central Markets, then that’s a bonus too’.

The Elizabeth City Centre sits right behind the Centrals home ground, and despite absolutely no contact with the shopping centre yet, Goyudogs is confident that it will be the first step to painting the town red (and white and blue) with Bulldogs references.

“Along with this, Elizabeth Centrelink will become Centrals-link”

‘We have a plan for a lot of areas around the northern suburbs to get behind this campaign’ Cletus stated, rolling out a map of the Playford Council Area ‘The Centrelink across the road from the Oval will be Centrals-link, Elizabeth Downs becomes Elizabeth Dogs, Argana Park shall become “A-garn-da-doggies Park”, and we want The Red Lion Hotel to be renamed The Blue, White and Red Lion Hotel’.

Goyudogs stated ‘The whole “ex-con” oval thing is a negative stereotype about the northern suburbs having a higher population of criminal offenders. I mean, it’s true, but we really want to deflect the attention that comes with it, and we think council renaming the suburb of Penfield to Plattenfield will certainly help’.

Editor’s note: A big thanks to Centrals Fan, Rogan, for letting us use his picture. Check out his art here and the Holden Employee Portrait Project he is working on.