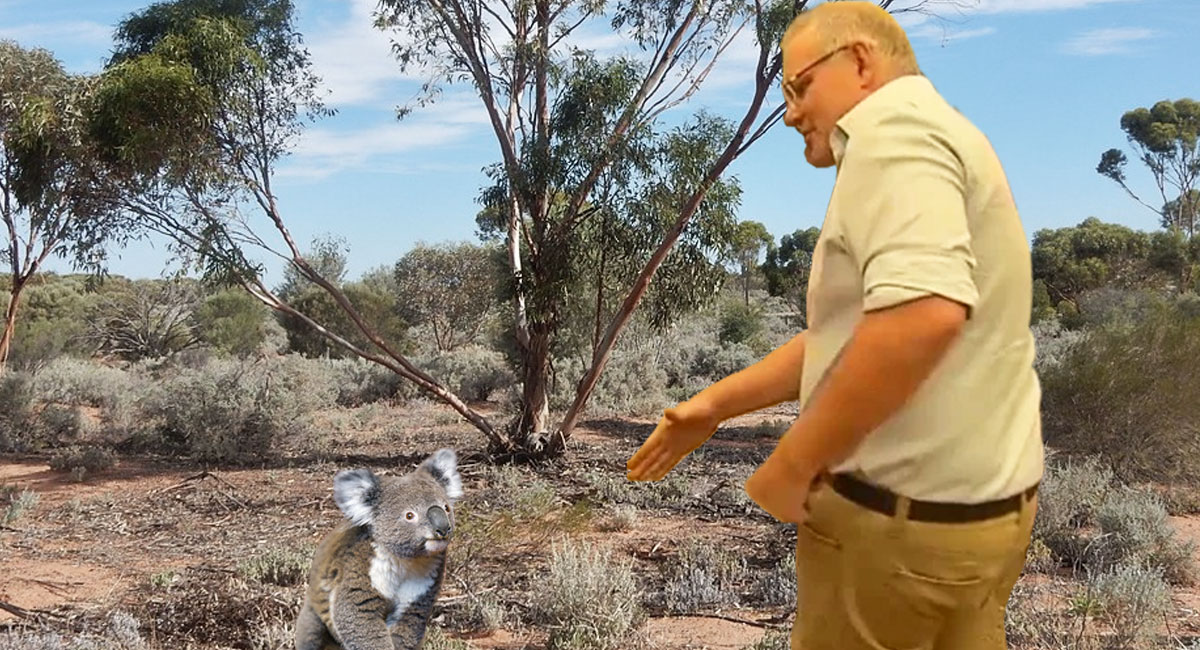 As news of the Prime Minister’s visit to Kangaroo Island spreads amongst what remains of Kangaroo Island’s koala community, the remaining 25,000 on the island have gone missing overnight. However, animal experts have assured us that there is no cause for further concern, the island’s koalas are merely avoiding being assaulted with an unwanted, cross-species handshake.

Although it’s not known where exactly the koalas have gone, experts have pointed out the animals’ natural discomfort for awkward situations and unwanted bodily contact.

‘We humans think that we’re quite different to koalas, but that’s simply not the truth’, says Koala Conservationist Chowzon Youkalipts. ‘Koalas love a good viral video too, they’ve all seen the footage of the Prime Minister shaking that lady’s hand against her will. Some of the treehuggers even got the hashtag #notmyPM trending on Gumtree, they’re all saying they didn’t vote for him. It’s technically true, I suppose, you don’t actually vote for a Prime Minister in Australia. You vote for your local candidate’.

‘I mean, I did try explaining this to a bunch of koalas, but they didn’t seem interested in learning about Australia’s electoral system. Especially when I told them that Morrison’s on his way to the island. They were far more interested in going into hiding. They hate awkward situations like that, koalas’.

We were more impressed that the island’s koalas were able to get a hashtag trending on Gumtree, a website made for buying and selling used goods and for messaging sellers saying that you’re definitely interested in that couch I’m selling and that you’ll definitely be there between 4 and 7 tonight, you have cash. And then seemingly turning your phone off forever. They truly are a superior species.

Editior’s note: In seriousness, the impact of the Kangaroo Island fires on the island’s wildlife and local economy is overwhelming. If you can, the island needs your help.

PIRSA has activated South Australian Veterinary Emergency Management (SAVEM) to coordinate the response to wildlife in need of rescue. You can donate to their efforts here: https://www.savem.org.au/about-savem/donate/

The Kangaroo Island Council is also seeking donations to assist those in need who have been affected by the fires. You can donate to the KI Mayoral Relief and Recovery Bushfire Fund here: https://www.kangarooisland.sa.gov.au/notice-board/latest-news/ki-mayoral-relief-and-recovery-bushfire-fund