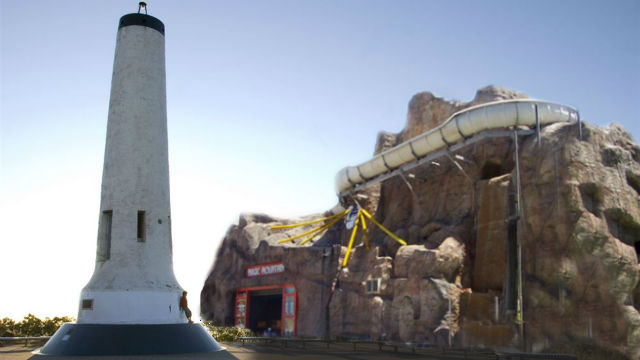 The Adelaide Hills Council have announced development plans for a ‘new’ theme park at the state’s most popular hiking destination in a bid to increase tourism.

Hills Council representative Al D’Gate stated ‘people have had enough of all the boring nature of Mount Lofty, so we’ve decided to add a bit of excitement at the summit. And the best part is, we’ve saved a fair bit of money by utilising the remains of a theme-park that was demolished well over a decade ago’.

Magic Mount Lofty will serve as a new meeting point for Adelaide Hills teenagers, tourists and crappy theme park enthusiasts. The new theme park will include most of the attractions of the Glenelg based Magic Mountain, including pinball machines, the shooting gallery, and of course, the waterslides.

Al D’Gate stated ‘yes, the waterslides are coming back, and when we get a sprinkling of snow, these will be converted into tobogganing hills much alike Mount Thebarton in the 90’s. In addition to this, anyone who has happened to hold on to their game tokens for 15 years, will be happy to know that these will be valid at Magic Mount Lofty’.

The theme park will block 90% of view from the summit, however visitors will be able to view the city via the Sky-Cycles attraction. The project is due to be completed in 2020, and although funded by private enterprise, the opening of the theme park will no doubt include Georgina Downer presenting a giant novelty cheque for some unknown reason.

Editor’s note: Thanks to Kultha Hier for the suggestion of this concept.