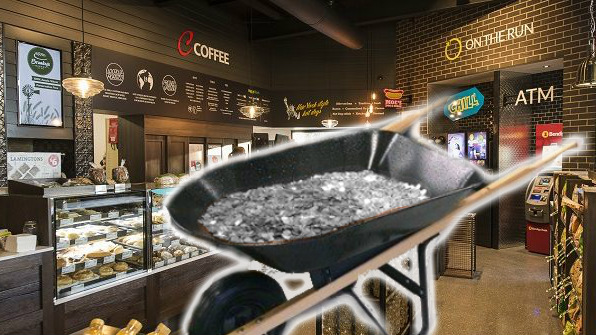 After reportedly being denied being able to buy milk and bread with a few fifty cents pieces, the single mother from Salisbury has confidently returned to the local On The Run with a vengeance.

Lugging a wheelbarrow heaped with five, ten, and possibly a couple of obsolete two cent pieces, she intends to pay for a carton of Benson and Hedges Fine, a full tank of premium petrol, a two litre iced coffee, and one of those New York Yankees caps on the rack that every single OTR seems to stock, but nobody ever buys.

After a brief protest from the underpaid trainee OTR clerk, the single mother instantly fired up ‘do you know I am and what I’ve been through?! Don’t try to pull that 1965 Currency Act bullshit on me again! I know my rights! Try and deny me and my kids again, go on, I dare you!’

Several hours into counting the coins for the total of $480.65, the mother was questioned as to what the small pieces of pig coloured ceramic scattered throughout the wheelbarrow were.

‘Keep asking questions and I’ll smash you too’, the mum replied ‘look, I wouldn’t mess with me, I’ve gained 27 insta followers since last week and have the ‘Tiser’s number’.

At the time of publishing the clerk is still counting and the mother has eaten three Krispy Kreme donuts and played at least a dozen games of spot 10 Keno.