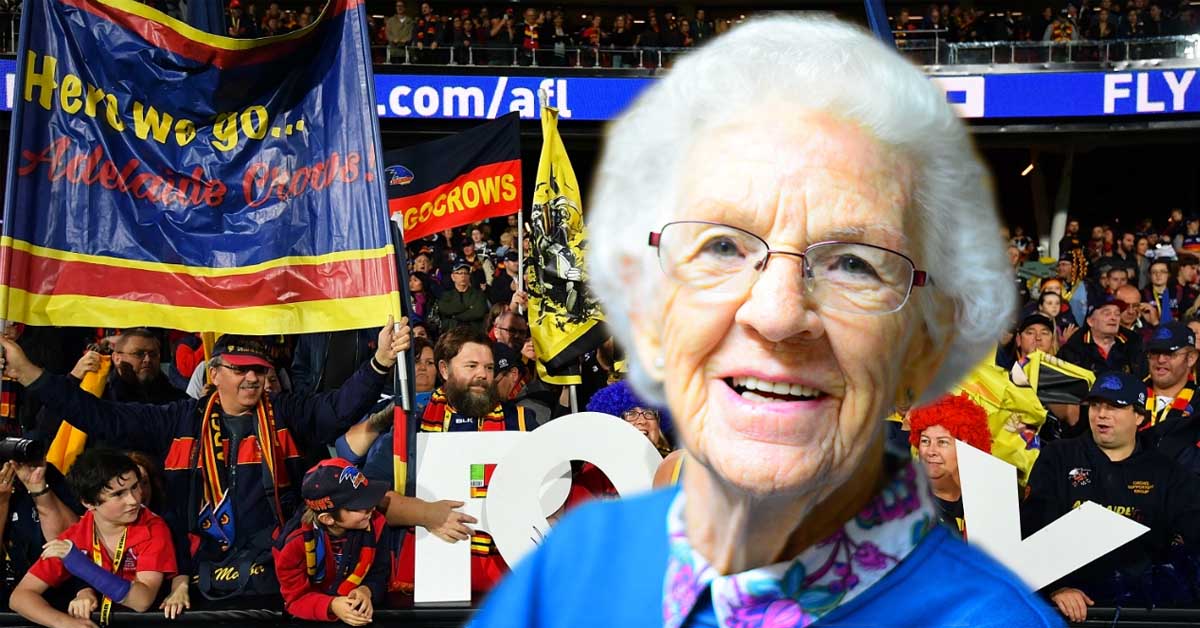 SHOWDOWN SPECIAL: Donning her homemade woolen Adelaide Crows scarf and an unironically vintage bomber jacket, Rose Parque lauds the precise kick of her favourite Crow, Brodie Smith while also appearing to tick off all of the requisite attributes of a one-eyed Crows supporter.

‘I love my boys, Rory’s my favourite, of course’, says Parque while adjusting her tri-coloured homemade seat cushion. Although it’s unclear which football-playing Rory is indeed her favourite, Sloane, Laird or the less popular choice, Atkins.

‘And David [Mackay], he seems like a nice boy’, although the first name basis on which Parque’s relationship is based doesn’t seem to go any further than Eddie Betts, “Tex” and dozens of seemingly interchangeable blonde-haired players.

Judging by Parque’s jacket (which, it seems has been bought in three sizes too large to accommodate for a growing number of badges featuring players’ names and headshots), she only knows the names of four players.

Badges with photos of Sloane, Smith, Daniel Talia and Mackay take up the vast majority of real estate on the jacket. The Mail counted two dozen badges bearing the photo of David Mackay.

Before the Adelaide Mail is able to quiz Parque on the baffling prominence of the much-maligned wingman, she begins her ritualistic and indiscriminate shouting of the word “ball” whenever an Adelaide player touches an opponent.

At quarter time Parque packs up her belongings and heads off home ‘to beat Beulah Park traffic’, but not before shouting at a jogging umpire for not ‘looking after her Richie [Douglas]’.

Editor’s note: For the dozen or so Adelaide fans who are young enough to know how to operate the internet, this is what is called ‘satirical banter’. If you’re offended by it, rather than writing an angry letter to The Advertiser, please see our Power fan article.