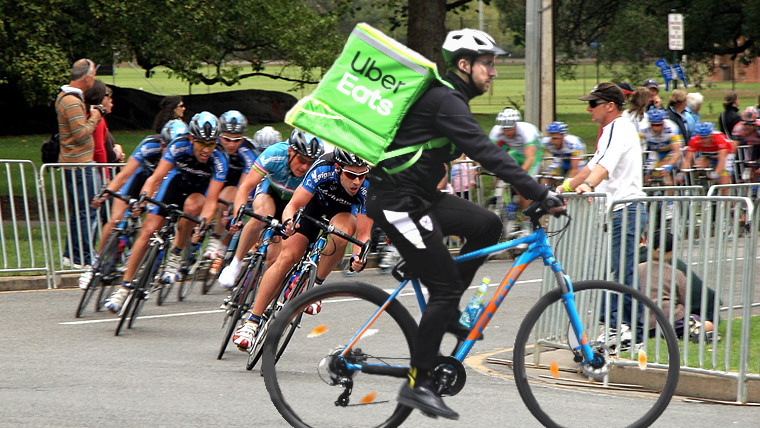 Today the Barossa hosted the first men’s stage of the Tour Down Under, a gruelling 150 kilometre slog even for the most experienced cyclists.

However today’s winner came as a surprise to many when Hashmir Groopex, an Uber Eats rider, was unexpectedly crowned king of whatever it is they call this stage.

What started out as a routine pickup of a Treasure Chest Pack from Munno Para Barnacle Bill’s to be delivered to Craigmore has ended up being hailed as one of professional cycling’s greatest feats (and feasts).

‘I picked up the order and I rode along Main North Road like I was supposed to’, recounted Groopex ‘but then my phone died so I had nowhere to go. I remembered the address was “something-more” so I just kept riding more, and more, and more’.

Soon Groopex somehow found himself at the tail-end of the peloton at Tanunda, ‘I thought, these Uber Eats riders seem to know where they’re going, so I followed them for a bit’.

Eventually making his way to the front of the group and growing increasingly worried about his rating, Groopex powered through the finish-line on his K-Mart Huffy, breaking all previous cycling and Uber Eats records.

Unwillingly ushered to the winners podium, Groopex fronted the media stating ‘I need to get this order delivered, does anyone have an Oppo charger?’. However, Groopex was almost immediately stripped of the accolades once officials found out he did not test positive to any performance enhancing drugs.

He was then fired as a sub-contractor for Uber Eats for failing to make the delivery. However, he will just re-register next week with another fake name.