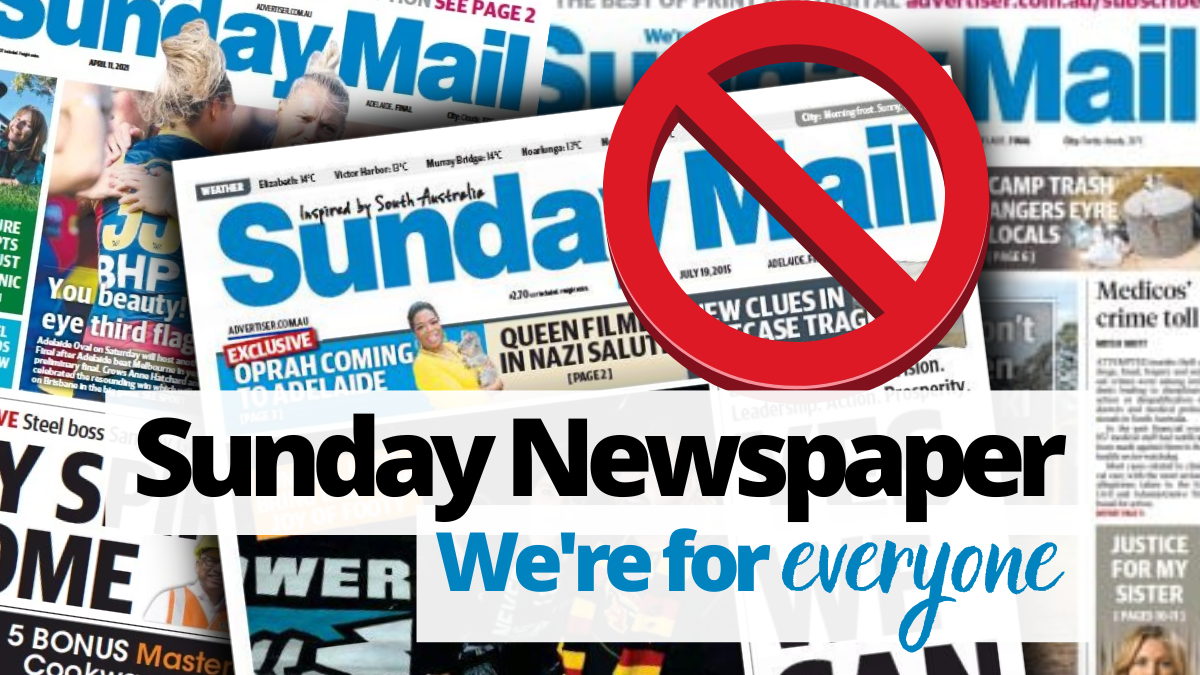 For over 100 years The Sunday Mail has been South Australia’s sole Sunday paper of choice for the State’s football fanatics, house hunters, and problematic punters. However, it seems that the threat of cancel culture and definitely very real calls for gender neutrality will lead to a name change for the tabloid later this year.

The activist behind the call for the name change, local university student absentee Lacinta Chripplejay, told our reporters about their reasons for the change request.

‘Well, like, it’s just about being really sensible and more accepting, like, isn’t it?’ stated Lacinta who clearly had no idea where they were going with this. ‘I mean, ‘Mail’ just has such a masculine vibe to it, and the paper was probably called that because only men were allowed to read the paper back then, I guess. So I’m all about changing that to support the female and trans community’.

‘Like, I’ve never actually met or spoken to a trans person, let alone consulted them on this, but I assume that this is absolutely something they’d want. Just like all those other definitely very real topics like Golden Gaytime, Aretha Franklin’s ‘Natural Woman’ song, and fairy bread, that have been rightfully changed recently’.

However, others don’t feel the same way about this name change.

‘It’s all going too far. Seems like every other week FiveAA are reporting that there’s another definitely real thing we can’t do or say because it might offend someone’.

“‘It’s almost like people are now just making up stories for laughs and to cause fake outrage, but no, it’s definitely all very real! It was even on Sky News.'”

‘Bunch of easily triggered snowflakes this world has turned into’ concluded the man who recently voiced his outrage about The Wiggles recruiting new members.

‘I’ve never read the Sunday Mail, mainly because I don’t have a subscription and I don’t know how to read, but rest assured, I will continue to never read their paper and be voluntarily illiterate because of this’ replied Con, somehow.

‘It’s this whole LGBTABCDQ whatever stuff’, replied Rye with a smirk, thinking this was heaps funny, ‘I mean, I’ve never met a trans person or anything, but I sure as hell reckon the vast majority of them wouldn’t just be regular, boring people who you wouldn’t even know were trans, that’s for sure’.

Adelaide Mail approached the Sunday Mail for comment, but then we remembered the restraining order.

Editor’s note: Rest assured, all non-woke, un-P.C., anti-tolerant readers of our fine news. We will never change our name out of the fear of cancel culture and vow to continue our unbiased reporting encouraging the people of South Australia to think critically for as long as our AI generated content allows us to.