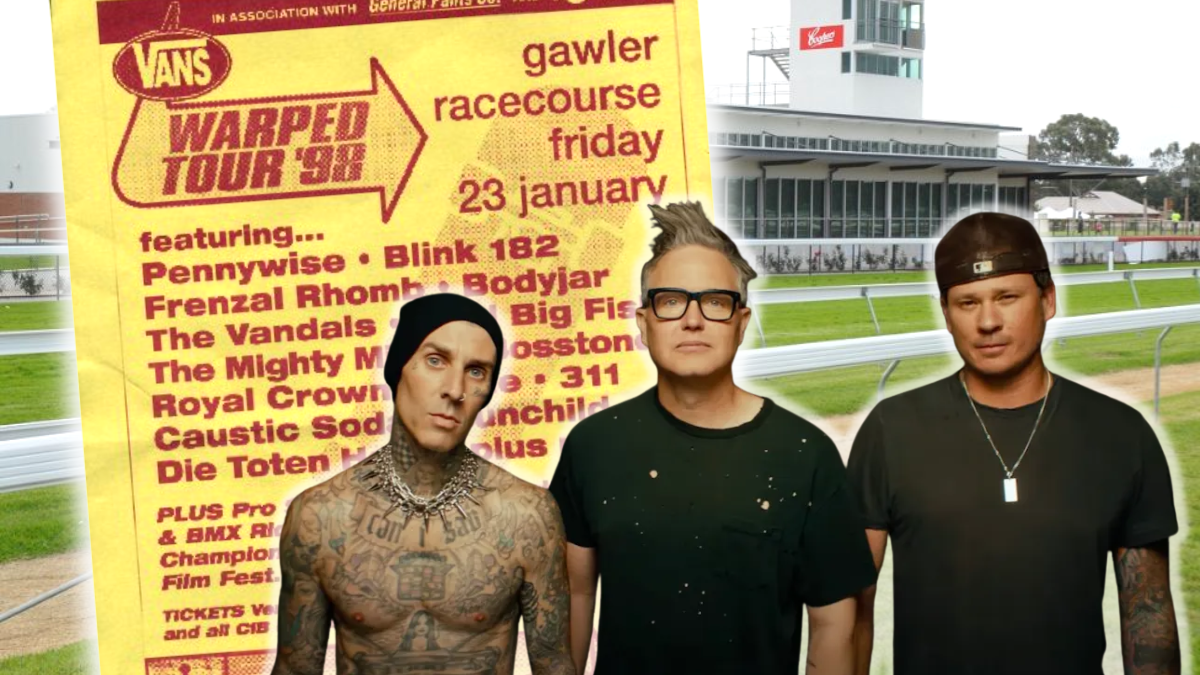 With blink-182 announcing a world tour with original guitarist Tom Delonge, 30 somethings everywhere are excited to get their hands on tickets, but some have questioned many of the venues they will play at.

blink-182 played the 1998 Vans Warped Tour, which was randomly held at Gawler Racecourse for some reason, just prior to current drummer Travis Barker making the awful career misjudgement of leaving The Aquabats.

While Adelaide hasn’t missed out on the blink-182 world tour, it appears many Gawler residents are asking “Why no Gawler?”

‘Big hotshots think they’re too big to play at the Gawler Racecourse again and playing the Adelaide Entertainment Centre instead, so much for being “punk”‘. said Gawler resident Matt Anfederminz

‘Gawler Racecourse would be a perfect venue to host blink again. Not just because it’s near my house, but because…well, Dude Ranch! And I mean, what could be more anti-establishment than racing animals against their will, often leading to their death?’

‘Plus, it’s not that far from the city’. said Matt, continuing to uphold the blatant lie that each Gawler resident firmly believes.

‘Cost me 46 bucks to see them here back then, now they want hundreds in a bigger venue. Sell outs. Hey speaking of sell out, I also saw Reel Big Fish play here that day, and 311, and Royal Crown Revue, AND The Mighty Mighty Bosstones. Now, that’s the reunion show I’m really hoping for. Fuck blink. Hopefully with COVID calming down Dicky Barrett can come to his senses and reform the band’.

‘Now, working from the start to the The Final Parade, here’s a long and mostly uninteresting history of the Mighty Mighty Bosstones. The year was 1982 and the British 2-Tone era was dying. However, the hardcore punk scene in New England was thriving with-‘

Matt then just spent the next three hours talking about ska to anyone who would listen.

Which, of course, we did. Ska fucken rules.