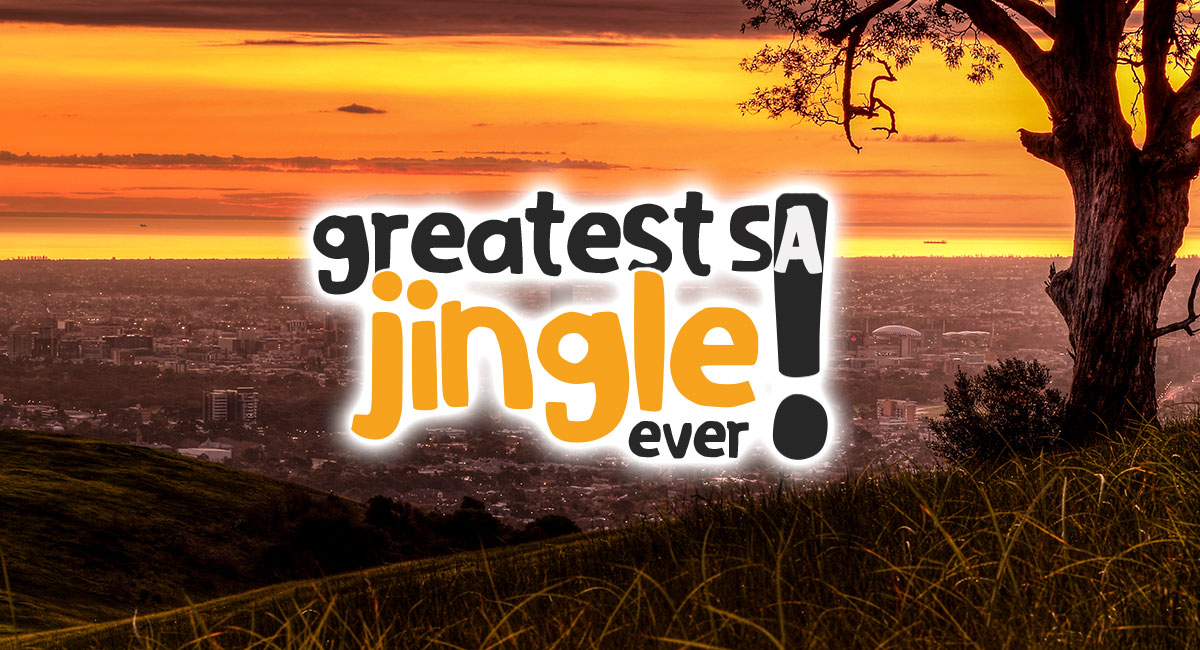 We need to settle this once-and-for-all: what is South Australia’s greatest ever jingle? We’re torn in all directions, between car yards who introduced throngs of South Australians to 60s American surf bands, bottlos’ Belushi homages and heartfelt ballads about a supermarket.

12th May 7:00pm
Bob Moran vs. Shoe Shed
We had pegged Bob Moran as slight favourites heading into this encounter. But it turns out that people well and truly got ‘it’ into their heads. What is it? We don’t know, but you’d best get it into your head quick smart. Shoe Shed takes home the biscuits with 61% of the vote.

Designer Direct vs. CMI Toyota
The luck of the wildcard entrant seems to have stopped here. Designer Direct might just have given their all to get into the round of 16, but they couldn’t offer much resistance to the crowbarred pun ‘CMI-iling’.

Noel’s Caravans vs. Murray Pest Control
Here we have a stinking hot favourite, it seems. The chatter around Noel’s 2020 entrant has just about reached fever pitch. Walking on through with 88% of the vote, do we have a contender for the title here?

West End vs. Foodland
A couple of South Australian icons here. We had West End down as favourites but did their multiple jingles cannibalise the vote in people’s minds? Foodland were clear winners on the day with 62% of the vote.

Booze Brothers vs. Paint Supplies
Boy howdy! This was a battle for the ages! We’re not sure what we did to deserve this matchup, but we haven’t seen such a hard fought contest since Georgina Downer showered Mayo with giant cheques. There was never more than a couple of points between the two, with fewer than 5 votes separating the competitors at times. Eventually, Paint Supplies were able to settle it with 51% of the vote, but have they used all their reserves going into the next round? Only time will tell.

4th May 5:15pm
Whitehouse Furniture vs. Adelaide Furniture & Electrical
Coming up against a hot favourite going into the competition, Whitehouse Furniture was always going to have a tough first round. And while 21% of the vote might look like a low score on paper, we think a defunct furniture store recording that level of the vote from their “I’m a lumberjack”-inspired jingle against Joe is something to be proud of.

And with that, we have a second round! We saw a couple of upsets in the Round of 32. Barnacle Bill would be wondering if it could have done more, while Rite Price Heating & Cooling slogged it out, but were outclassed by a plucky Designer Direct. We now take a rest day and look toward the Round of 16 and a few matchups that have us licking our lips. Be sure to follow Adelaide Mail on Facebook and get your votes in. Until tomorrow, it’s goodbye from us.

Roof Seal vs. Suzuki In The City
A seal singing a 1300 number while standing atop a suburban home’s roof might sound like the stuff of cheese dreams, and at some stage it probably was. Unfortunately, CGI seals singing about roof restorations aren’t “music” to you people anymore. What have the kids become.

Shoe Shed vs. State Bank
You should never discount the State Bank’s ability to record massive, unprecedented losses. Even almost three decades after the bank’s state-shattering collapse, State Bank is still marking down embarrassing losses for SA. In fact, we’ve got suspicions that the 13% that of the vote recorded by State Bank in this poll is exaggerated by the inclusion of under-performing assets that really shouldn’t have been counted in the first place.

2nd May 5:15pm
Le Cornu vs. State Swim
We have warm memories of Le Cornu’s. The wall-to-wall red leather recliners. That warm, nostalgic smell of the ballpit (which looking back may have been other kids’ urine), the beautiful blazers. But in the end, a little tagline that ensured us that we’d love it at the place being advertised was not enough against a bunch of kids urging us to learn to swim.

Designer Direct vs. Rite Price
Maybe Designer Direct’s jingle is way stronger than we first thought. It was a close contest, but Rite Price’s jaunty tune ended up just short with 46% of the vote. Hot stuff.

Wildcard Entry: Designer Direct vs. Parafield Discount City Furniture vs Rocca Bros vs Whitewood Centre
As both the sole news source covering this competition and the organisers of the competition, we’re hesitant to editorialise too much. But, sometimes the punters just get it wrong. This is one of those cases. Designer Direct was put through its paces in a wildcard round, and came out unscathed. But in our opinion, both Parafield Discount City Furniture and the Whitewood Centre have the stronger entries. Send your condolences out on Main North Road.

ToyTown Parafield vs. Noel’s Caravans
We must have some seriously repressed memories because we cannot, for the life of us, remember that ToyTown one. It’s catchy, sure. But it would’ve been creepy as all hell as kids. Noel’s Caravans is through from this matchup and will come up against a pest control team that, up until this stage, has had absolutely no worries.

Light Factory vs. Foodland
Remember when Foodland’s jingle seemed entirely more appropriate for the a supermarket. Upbeat, fun, it made you feel happy about being a “mighty South Aussie.” And then, sometime in the last decade a re-record saw the jingle reimagined into heartfelt balladry. Which does make us tear up every time, to be honest. Other South Aussies obviously felt the same, Foodland running with 83% of votes.

29th April 5:15pm
Paint Supplies vs. YCN (Your Child’s Nursery)
It’s the baby store with so much more. More what? More volume! YCN’s ad was SO MUCH LOUDER than everything else on TV. Could that have worked against them in their first round matchup against Paint Supplies? Or were their opponents simply too good? They are a favourite in this contest for a reason.

This result locks in our first second-round matchup. Booze Brothers will take on Paint Supplies for a chance to advance. This is going to be big!

28th April 6:00pm
San Giorgio’s Pizzeria vs. SA Quality Home Improvements
Let’s pause for a moment and respect just how many syllables San Giorgio managed to fit in to the latter stages of their jingle…okay, we’re back. Very little fight put up by the Rundle Street pizzeria. Great pizza, and perhaps the victims of a bit of recency bias here. In the end, SA Quality Home Improvements were too good, winning with 86% of the vote.

Bob Moran vs. Snappy Tom
The cats of Australia have made their choice, and it turns out that they’re car people. Or maybe just big fans of the Beach Boys. Not that we’re suggesting that Bob Moran cars ripped off the Beach Boys at all. We wouldn’t suggest that (just in case the Bob still has legal representation). Bob goes through with 61% of the vote.

27th April 8:05pm
Paramount Browns vs. Pedro’s Pizza
Is it a jingle? Is it a poem? (Actually there was a brief moment when Paramount Browns reinvented their rhyming couplets as a very earnest jingle). Anyway it was the battle of the two businesses with very little in common. One a scrapyard selling…stuff…in piles, the other a pizza shop that sells pizza in regular flat pizza-shaped measurements. Paramount Browns go through to the next round. They’ll be readying themselves for a tough face-off against either State Swim or Le Cornu.

Haggle Co vs. CMI Toyota
Turns out that a half-cooked jingle sung by South Australia’s answer to Hotdogs with no backing track, no melody and no lyrics other than the directive that we HAVE TO HAGGLE was no match for putting. a CMI-ile on our collective faces. The car dealership has mobilised its fanbase and took home the first round lollies with 74% of the vote.

26th April 7:30pm
Cheap As Chips vs. West End Draught
Another matchup, more controversy as the organisers are accused of picking the WRONG West End Draught song as the competitor. This is worse than the time the Olympics played Borat’s Kazakhstan national anthem for a gold medallist in the shooting. Still, other countries do have inferior potassium, let’s be honest.

In the end, it mattered little with West End Draught scoring over 60% of the vote to beat off their discount variety store rivals. Not beat off, I don’t mean…

John’s Leather Warehouse vs. Murray Pest Control
A bit of a pasting here, with Murray Pest Control picking up 85% of the vote. We had fancied John’s as a bit of a dark horse in the competition, but it seems their the victims of recency bias. An absolute slapping for the ol’ leather warehouse. Just goes to show that it pays to always be advertising…even if you haven’t been in business for several years.

25th April 3pm:
Ned’s vs. Booze Brothers
It’s an undisputed bloodbath. Ned’s are the first to be eliminated and despite some trademark South Aussie journalism sloppiness when we set up the poll for a week instead of 24 hours, this all seems pretty clear cut.

Could Booze Brothers be a dark horse in the comp? They’re through to the next round to face off with either Paint Supplies or YCN Baby Store. Could be a tough trot for the Boozers.

25th April 10:30am:
Wildcard Entry: Eagle Bitter vs. Cheap As Chips vs. Sofa Shop vs. Bernard & Keryn Brown Furnishers
Kicking things off with some controversy, the organisers of the comp had been accused of ‘Sofa Shop erasure’. The door was thrown open for a few latecomers to prove themselves. Early odds favoured the traditional verse-chorus arrangement of the Sofa Shop, but in the end, an earworm takes it home. Cheap As Chips gain a wildcard entry at the expense of a sexist, 80s beer commercial.