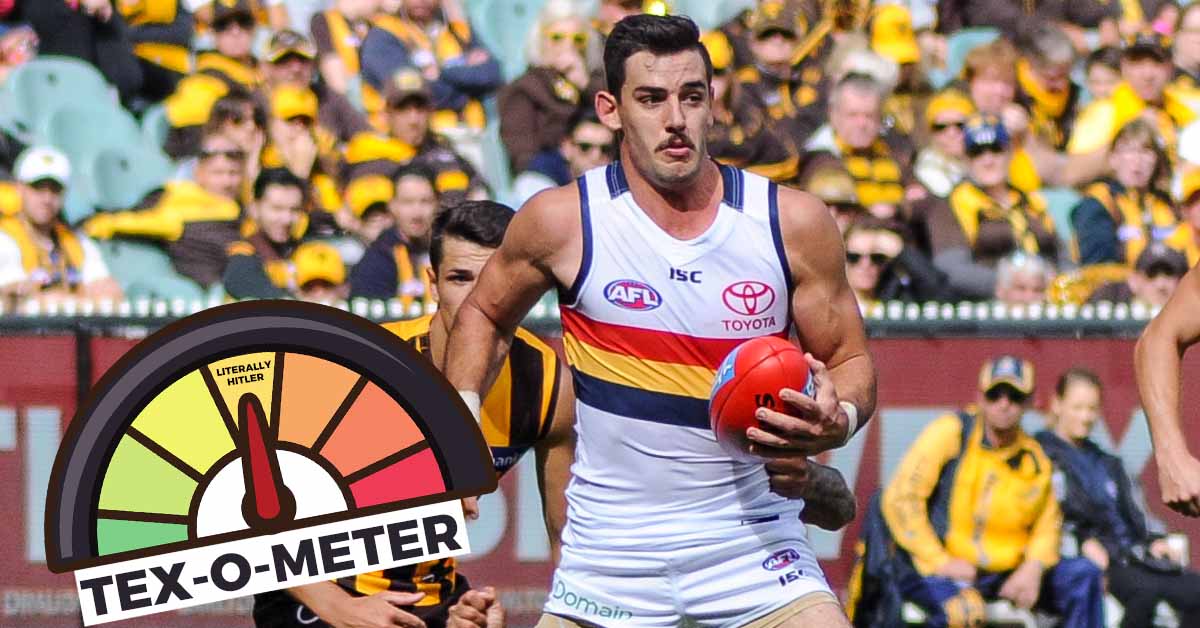 With his form flip-flopping since the 2017 AFL Grand Final, Adelaide co-captain Taylor Walker has been the cause of much confusion for casual fans of the club.

Over thirty per cent of the Adelaide Crows fan base consists of people who merely wish to engage in gentle Monday morning banter with co-workers who have no common interests. However, the combination of Tex’s form and the public’s mood toward the moustachioed skipper has turned idle Monday chit-chat into painstaking weekly research projects on the Adelaide captain.

Shawn O’Lasletter, who works as a Manager of Word Document Formatting Issues says he is now devoting up to 25 hours per week in identifying which adjectives he should be using for Walker on a Monday morning.

‘I’ve developed a patented system which tells me exactly what I should be saying about Big Tex before even Sam McClure has opened his big, dumb mouth’, says O’Lasletter.

O’Lasletter proudly demonstrated his Tex-labelling machine to a gathered throng of journalists. All of whom remarked on both the size of the device, with his machinery engulfing O’Lasletter’s Norwood flat, as well as the volume of toxic fumes spewing from its exhaust.

‘I’ll show you how it works. All we have to do is load in the entire week’s recordings of every time Rowey shouted on the FIVEaa sports show. This week we have 60 hours of that, which is weird because the show’s only on for 15 hours per week’.

‘Then we add in Tom Richardson’s InDaily column. I used to use Michelangelo Rucci’s column but for some reason The Advertiser put that behind a paywall and expected people to pay for it, I suspect that’s just a long-running joke’.

‘Then, lastly, we simply need a vial of blood from a former Crows player. This week inaugural Adelaide player Rodney Maynard has volunteered to give a litre of blood to this good cause…please disregard the fact that he’s unconscious’.

Two hours later the machinery delivered a verdict on the general mood toward Taylor Walker. ‘So, this week the machine has given us the phrase “basically Hitler”. So, I’ll be trying that out tomorrow’.