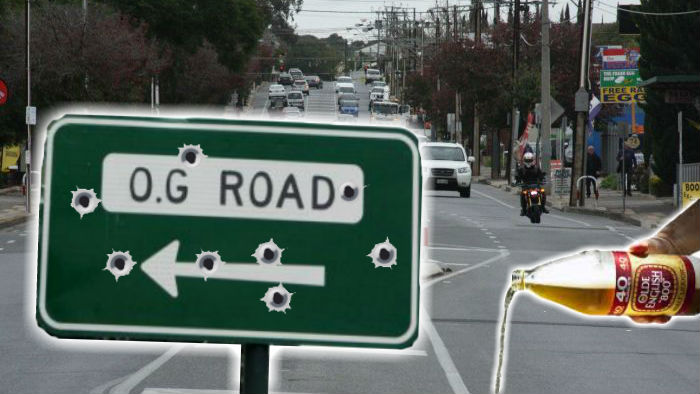 Living up to its name, OG road of Klemzig has been attacked in what is believed to be a drug-fueled turf war.

Having maintained the Original Gangster status for more than a century, it has always been inevitable that the road would eventually be targeted by a fresher road looking to make a name for itself.

Few witnesses have come forward to comment on this reported gang war, fearing repercussions, but rumours state a black Chevy Impala was witnessed at the scene at the time.

As for now, as tributes grow for OG, the entire street is covered in malt liquor poured out by OG’s homies. ‘It’s a nightmare’, said resident Clem Zigg ‘bringing this gangbanging turf-war to suburbia, but what’s worse is that I can’t drive down the street! I’ve had to hire a kayak for the to get to the bus interchange. I’m not very good though and generally capsize at least a few times. It’s great fun, but the downside is I rock up to work stinking of booze, which I guess isn’t all that bad, it covers the weed stench’.

Police are yet to name a suspect, but it’s believed the CBD’s Compton Street may be questioned later today.