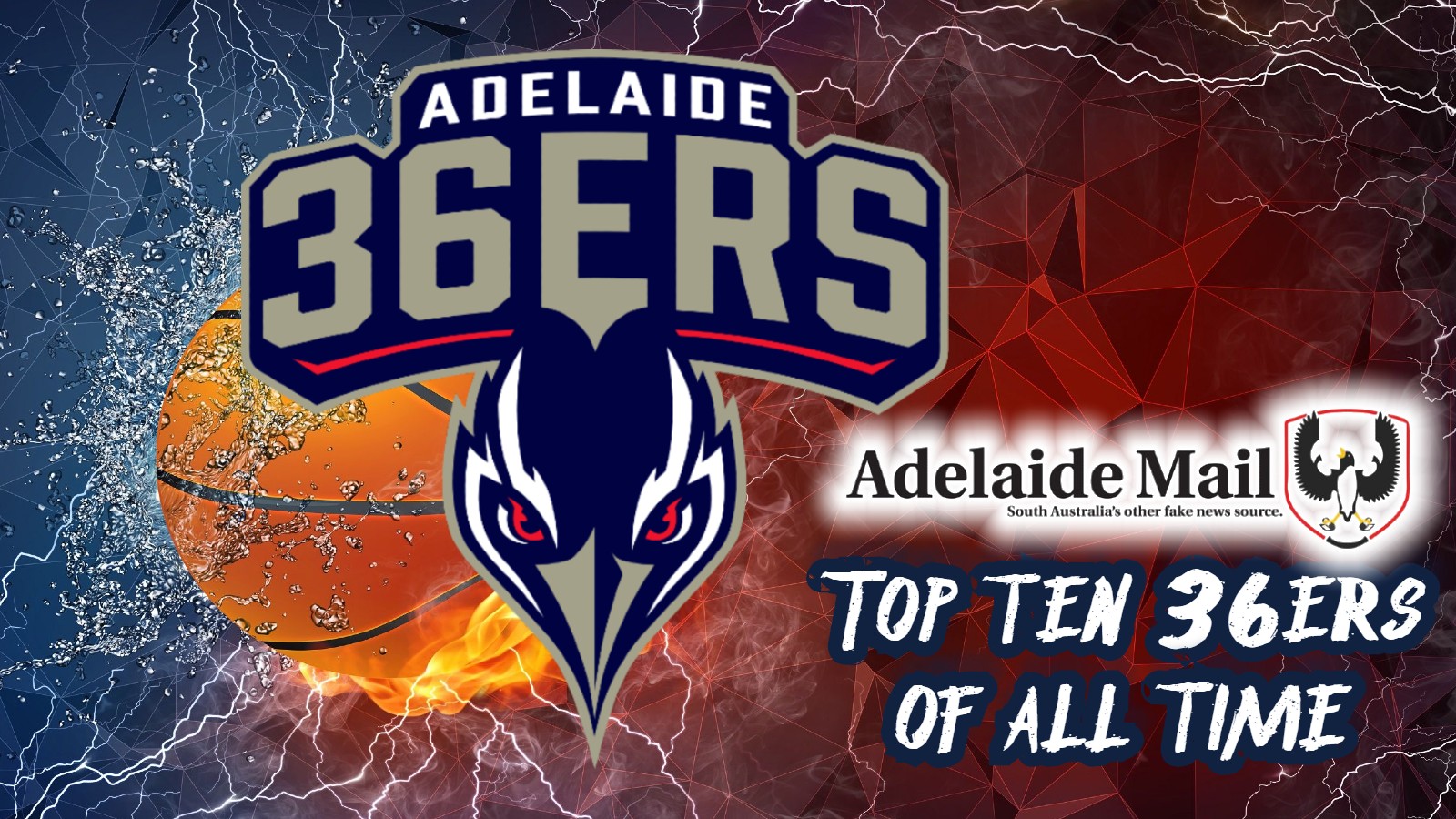 Here we are again, another list. We’re just as happy about it as you, okay? Nobody wants to read lists about former South Australian sportspeople, especially us. I mean, we have to edit the damn things.

And Derek (our resident sports writer whom we picked up cheap at a garage sale up in Virginia a couple years back, and now we can’t get rid of because of the Federal Government’s unAustralian JobKeeper allowance) just keeps sending these things to us.

He’s been watching that Netflix thing about Jordan, so now he’s pretending he knows a thing or two about basketball. As this list goes on, it becomes very apparent that he actually doesn’t. Do us a favour and please ignore it so he doesn’t try and have this become a regular thing.

The Adelaide Mail Top 10 Adelaide 36ers of All Time

Recently telling Adelaide Mail ‘I have no idea who you’re talking about and please stop calling me’ in a thick Nebraskan accent, Maher certainly belongs on this list for his humbleness, along with his ability to keep his time-travel quantum physics and/or youth-serum a secret.

Once you play with the greatest NBA team of all time, where do you go from there to advance your career? To the Adelaide 36ers, of course.

Jo Jo English played parts of three seasons for the Chicago Bulls before deciding to further his career by playing for the Adelaide 36ers in 1995, where he was often plagued with questions from teammates, fans and officials.

“Did you really punch Derek Harper in front of the NBA Commissioner?”

“What was it like playing with Jordan and Pippen?”

“Brett Maher told me about this thing he saw in the future called Netflix and you’re on it apparently, what the hell is he on about now?”

All of which English was more than happy to always answer, or sometimes even bring up himself out of nowhere.

In an infamous incident at the Clipsal Powerhouse in a match against the Illawarra Hawks, English called a crucial timeout in the final minutes of the last quarter because he spotted a spectator wearing a Chicago Bulls hat in the third row.

Refusing to return to the court until he had finished his detailed, sordid tale involving groupies and illicit substances to the child, the Adelaide 36ers subsequently lost the game as a result. English was still named player of the game because in all honesty, it was a really good story. I mean, who knew Horace Grant had a chode?

No list would be complete without the all time top scorer in an NBL game. Not even completely irrelevant lists, like your shopping list for example. Seriously, go pop it on the fridge now, put “Al Green” next to tomatoes and milk, you won’t regret it, and the assistant you ask at Foodland will think there’s something wrong with you. Go on, it’ll be funny.

Initially drafted into the NFL, much like his time traveling teammate Brett Maher, Green chose basketball instead.

A huge athletic talent, Al even succeeded in running, winning the 1982 Bay Sheffield. An event he only entered because he misheard and thought that they were referring to fictional Broadway producer Maxwell Sheffield. Green was a big fan of 90’s sitcom The Nanny, even before its first episode aired somehow. Brett Maher probably told him all about it in the locker room or something.

A key member of ‘The Invincibles’, Green still holds the record for most points in an NBL game, proving he was always dominant up against the glass, both on and off the court.

(NOTE: Maybe check with someone before publishing that last sentence, guys. It’s probably obscure enough to be fine, but if people remember, they’ll definitely know what it means. Also be sure to remove this note before publishing. Cheers, Derek.)

Purely picked because we thought we would never find someone with a harder name to pronounce than Boti Nagy, Winitana played for the Adelaide 36ers in the 2007-2008 season.

However, as an ordained Mormon bishop, he chose to not play basketball on Sundays. This suited the Adelaide 36ers fine as much alike our shop trading restrictions, South Australia has a little-known law that forbids any form of basketball on a Sunday, up to and including the HotShot arcade style machines that are often seen at TunzaFun (or “Intencity” for all of you Southern Suburbs weirdos).

The Sunday Basketball law dates back to the 1960s when our State’s Premier Sir Thomas Playford got savagely dunked on by opposition leader Frank Walsh during a weekend streetball match.

The law has been devastating to our State’s economy with arcade centres reportedly missing out on millions in revenue due to these archaic restrictive basketball laws.

Dubbed the “Dunka from Noarlunga” by us in a nickname we literally just made up as we were typing this sentence, Bradtke was probably pretty good at basketball, but all we can remember him for is that glorious mullet.

We assume it was his trademark Noarlunga Neckwarmer hairstyle that got him all the way to the NBA where he played for the Philadelphia 76ers.

After his first season in the NBA, Bradtke insisted that the whole team grow mullets and rename the team the “Philadelphia 10-90s” in some sort of bizarre marketing stunt. Unfortunately, as a result he, and his mullet, were cut. Rookie team mate Allen Iverson was reportedly disappointed as his Woodville Waterfall was just starting to take shape.

Seriously, have you ever just watched this guy for a minute? Seriously cooked.

Next time you go to a game, forget about what’s happening on the court and just watch Murray for a bit. Gotta be on some sort of gear for sure.

Sure, not technically a 36ers player, but who has done more for South Australian basketball and the Adelaide 36ers than Ken Cole? Well, the top three entries obviously, but aside from that, probably very few.

Ken was the coach of the Adelaide 36ers through “The Invincibles” era, until some square journalist snitch at The Advertiser decided he would report that Ken smoked a joint during a post match celebration with the team. The Adelaide Mail would never do such a thing (the snitching, not the toking, we’re definitely hip to all that).

Cole was a brilliant coach, but also had some great ideas for the team that unfortunately never came to fruition once his career was cut short. Reportedly Ken had planned to rename the squad to the “Adelaide 420s” for the 1987 season, but accidentally used some of the paperwork for rollies when his Tally Ho’s ran out.

To hear the amazing true story of Ken Cole and the Adelaide 36ers, listen to this episode of AdeLOL. A comedy podcast that explores hilarious true stories from South Australian history:

Mark was known as “The Chairman of the Boards”, not for his fantastic rebounding abilities as many believe, but actually for his self proclaimed astute business acumen.

Often calling board meetings at all hours of the day and night to discuss the 36ers finances, HR issues and marketing, Davis was a driven, self-appointed chairman who worked long hours in the office, always taking calls on his uncharged mobile phone and frantically rifling through piles of blank papers.

He never was actually given a real job at the 36ers, but all the staff felt so sorry and a little concerned for him, that they let him use their offices and just kept giving him fake work tasks to keep him happy.

It’s reported that in 1987 teammates stole his briefcase and all they found inside was some unsharpened lead pencils, a half eaten packet of Arnotts Yo-Yo’s, and a serviette with “Close deal with Maher re Time Travel device, Thursday January 16, 2014. Ask him for a lift there. Lowball.” scribbled on it.

Davis actually reportedly never had any love for the game of basketball, he was simply a businessman who knew it would make good financial sense for him to be part of the team.

He now utilises his tax-deductible basketball camps as a creative way to teach young people basic business economic principles and how to start with MYOB accounting software. The kids love it.

Responsible for more missed opposition free-throws in the 2019-2020 season than anyone else at the Titanium Security Arena, the surprisingly difficult to redeem free cheeseburger is a worthy number one in anyone’s books.

What more could you ask for from an Adelaide 36er? Dual premier, multi-time all Australian, team captain, and playing 275 games. Without doubt Adelaide’s #1 36er.

How the Adelaide 36ers managed the astounding and extremely specific foresight to name the team this prior to the Adelaide Crows being established as a club and also well over a decade before Simon Goodwin started playing professional football is beyond us, but we’re pretty sure Brett Maher has something to do with it.