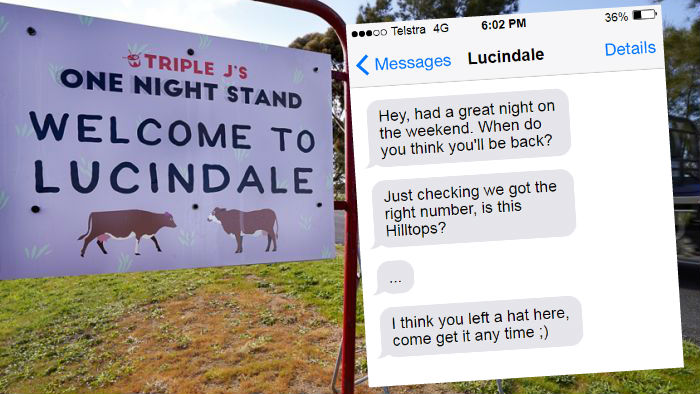 As the dust settles in the usually quiet town in our State’s South-East and life starts to return to normal, Lucindale has begun to wonder if there was more of a connection than initially agreed on.

In the wake of what has been the biggest thing to happen in Lucindale since Darcy Fogarty’s AFL debut, reports have surfaced that Lucindale has contacted some of the punters, presenters, and artists involved in Saturday night’s festivities.

‘Yeah, we definitely agreed on just a one night thing, I don’t think that could have been made any clearer,’ said Pressure from the Hilltop Hoods ‘we said our goodbyes and it all seemed cool. But then a day later we get these texts, asking when we’ll be back, if we’d like to catch up another time, saying I left something there, you know, the usual desperate clinger stuff’.

The Hilltop Hoods have ignored the texts, despite Suffa being pretty sure that he may have left a Yankees cap at the Gum Avenue servo. Pressure continued ‘I’m pretty sure someone else has given them our number. Also, how does a town send a message? Are we receiving these from like the unified voice of 450 residents, or has the land itself somehow managed to sign up to a mobile plan? And if so, how did it manage to text us? This seems like a really loose premise to me’.

These are questions that Adelaide Mail reporters have decided not to investigate.

After no replies from their texts, Lucindale has reportedly sent abusive messages to Tumby Bay, host of the 2011 One Night Stand.