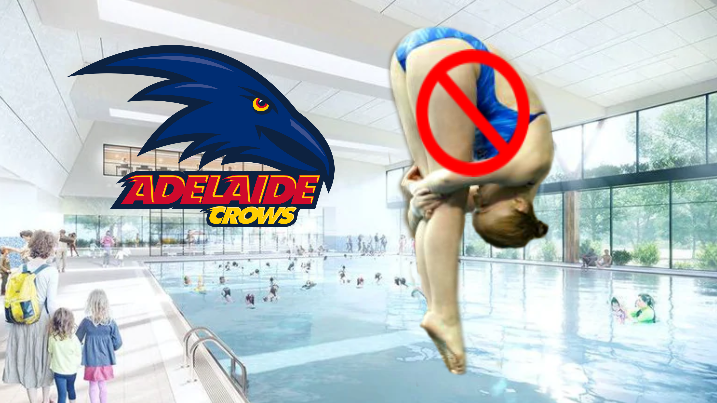 With the Adelaide Crows Aquatic Centre HQ looking to go ahead sometime in the near future because they’re the Crows and they can do whatever they want, a new world-class aquatic centre will be right in the heart of North Adelaide. However, it has been revealed there will be a few stipulations.

‘First and foremost, we will be abolishing the dive move commonly known as the “Pike Position”’ stated Adelaide City Councillor and AFC’s vice-marketing director Karen DeKrowes ‘we’ve had some bad experiences with Pike Positions before, if you catch our drift’.

However, some other features of the Adelaide Crows Aquatic Centre may be welcomed by some of the public. Karen continued ‘Well, having a look at our fanbase, we’ve decided that every day will be “Seniors Day” at the pool, lots of early morning aquarobics going on’.

‘But when it comes to the pool, it’s absolutely world class’ Karen stated ‘but unfortunately due to size restrictions, instead of a full lap pool, the new aquatic centre will have a three quarter lap pool. But we feel this will best suit the team’s maximum output, and fan interest in their performance’.